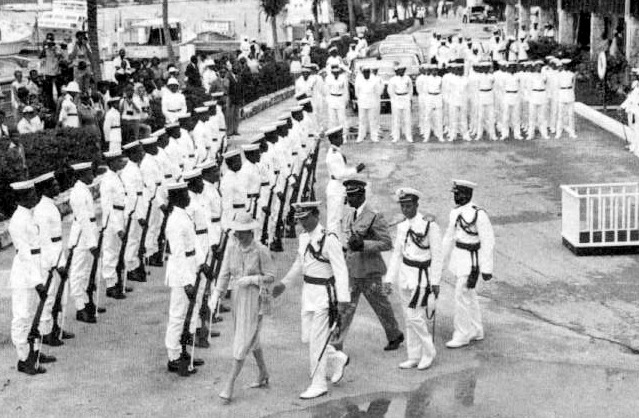 Defence Force Commodore William Swinley escorts Princess Anne on a tour of Coral Harbour Base after she received a Royal Salute in September 1979. (RBDF PHOTO)

NASSAU, BAHAMAS — On March 31, 1980, an act of Parliament was tabled by then-Prime Minister Lynden Pindling, laying the framework for a defense force that would patrol and defend the territorial integrity of the Commonwealth of The Bahamas.

The mandates of the organization include, but are not limited to: providing assistance in times of disaster; maintaining order in conjunction with the law enforcement agencies of The Bahamas; assisting with search and rescue; and maintaining navigational aids.

In its short history, the RBDF has seen eight commanders defence force, who have all played integral roles in moving the organization through formation, capacity building, pioneering, infrastructural upgrade and expansion, reconditioning refocusing, welfare and organizational development and operational transformation, to a high level of efficiencies and responsiveness and a vibrant, multi-missioned force that stands shoulder to shoulder with its international counterparts.

In more recent times, after the passage of the destructive Hurricane Dorian in 2019, RBDF personnel were deployed to Abaco and Grand Bahama to assist in the aftermath, and later in the security and recovery efforts on those islands. Additionally, during the current pandemic, the organization’s duties have also included curfew enforcement, COVID taskings, security operations, sentry detail at the National Vaccine Laboratory, law enforcement/civil authority support and border protection.

Forty-one years after its formation, with Commodore Dr Raymond King at the helm, the organization is steady on the pursuit of excellence and focused on organizational decentralization, agility, transformation and sustainment. The officers and marines continue to guard and protect over 7,000 square feet of territorial waters, exclusive economic zones, archipelagic baselines and a purported 2,222 islands, cays and rocks.

The organization salutes the men and women who have helped establish the mainframe for a successful entity, and congratulates those who continue to perform their duties in “The Pursuit of Excellence in Guarding our Heritage”.