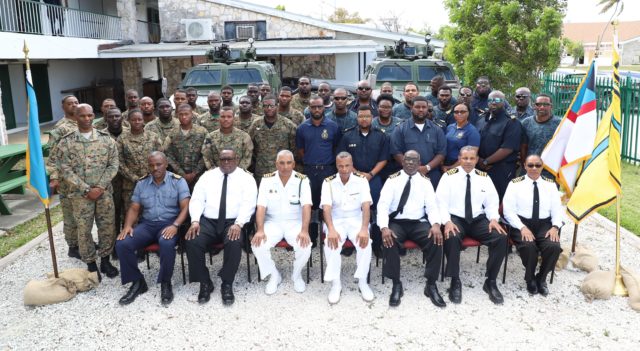 Participants of the two-week training exercise consisted of Officers from the Customs Marine Unit and the Tactical Unit. The training was designed to enhance future joint mission success for both Defence Force and Bahamas Customs members. The program also ensured that both agencies were prepared for the upcoming counter-terrorism Marlin Shield training exercise in May of this year.

Coordinated by the United States Northern Command, the bilateral counter-terrorism exercise will involve The Bahamas’ and the United States’ militaries, as well as local law enforcement agencies.

In attendance at the graduation ceremony at Coral Harbour Base were Commodore Tellis Bethel and Superintendent Tyrone Sands, who represented the Comptroller of Customs, Dr. Geannine Moss. Other members from both agencies were also hosted at the ceremony.

In bringing remarks on behalf of Commodore Tellis Bethel, the Commander Defence Force, Captain Chriswell stated, “If the Defence Force and Bahamas Customs are going to operate in the same environment, firstly as national partners, all must agree that there must be a common understanding to our respective roles and responsibilities.”

In his remarks Superintendent Sands thanked Commodore Bethel and his men for affording them the opportunity to train and work together as one unit, and he looked forward to having more training opportunities with the two agencies.

In April 2015, the Defence Force provided Bahamas Customs with the necessary technical support, guidance and training to assist that agency with establishing its Marine Unit. Today, the Customs Marine Unit is a fully operational Unit engaged in active border patrols.

The Defence Force’s partnership with Bahamas Customs, as well as with other law enforcement agencies is in keeping with the Commander Defence Force’s intent and The Bahamas Government’s overall strategic agenda to enhance multi-agency security cooperation.