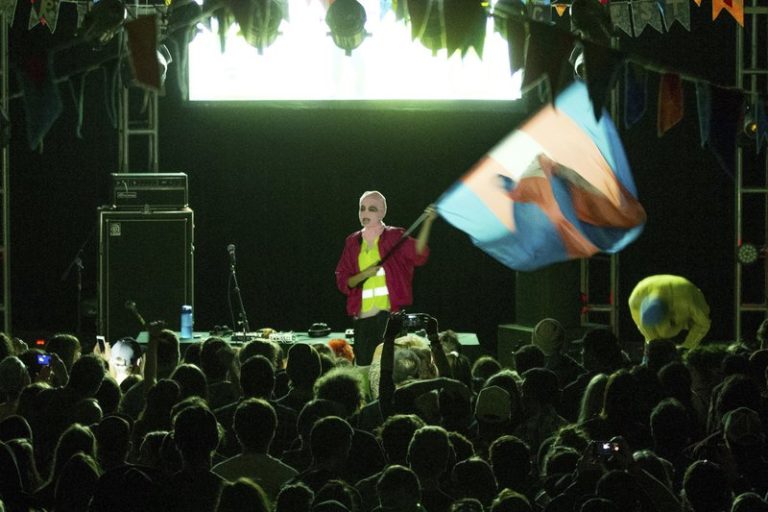 BOISE, Idaho (AP) — Idaho is not the most obvious place to attract members of the Russian punk collective Pussy Riot.

But even in the Republican stronghold that strongly supports President Donald Trump, Pussy Riot members carved out time late Saturday to swing by the largest city in the state, Boise, during their first North American tour.

“There is power in doing what we want, and not what they want,” said Nadezhda Tolokonnikova, who spent nearly two years in prison with another group member for a protest against Russian President Vladimir Putin in 2012. “Thank you for supporting us.”

The balaclava-clad women who rose to global prominence with daring outdoor performances in their home country brought a show to Idaho that was more political rally than traditional concert, featuring anti-fascist, anti-Trump messages. It comes as a special counsel investigates Russian interference in the 2016 presidential election and whether there was any collusion with the Trump campaign.

Idaho is the only Republican-dominant state that Pussy Riot is visiting during their North American tour, which has consisted of stops in bigger, left-leaning cities like Portland, Oregon; Seattle; and Chicago.

They were drawn to Idaho by the small but increasingly popular Treefort Music Fest, which launched in 2011 as a hyper-local indie-rock music festival but has since attracted worldwide interest. Other groups pushed a political agenda, but Pussy Riot is one of the most contentious to appear at the five-day event.

They played their political music videos on a screen on a dark stage as audience members raised their fists in solidarity. Attendees danced and cheered as the group played “Police State,” which came out on the anniversary of Trump’s election, and “Make America Great Again,” a 2016 hit released a week before the presidential election that focuses on a call to action.

“Pussy Riot has been on my radar for several years,” said Boise resident Adnan Muminovic, who was standing in line for nearly two hours to ensure he got a spot for the show. “I’m Bosnian, so I’m not fan of the leadership in Russia. I wanted to throw my support behind them tonight.”

Hundreds of other people stood outside the building, wrapping along the block and hoping to catch a peek of the group, which declined an interview request from The Associated Press.

“I think it’s really exciting that they’re here,” said Karissa Manske of Boise, who was waiting in line. “I think it’s easy to get bogged down with everything going on in the news, but having this politically charged group come to Boise means something. I knew I had to see them.”

Yet, even after braving the long lines, many in the back of the venue left several songs into the group’s set.

This article was written by KIMBERLEE KRUESI, Associate Press writer.