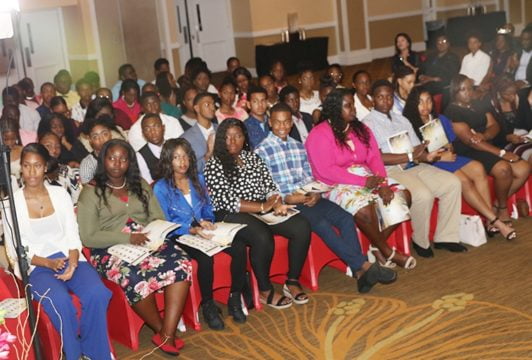 The 2019 Public School Scholars Programme awards ceremony was held on June 28 at Melia Nassau Beach. The Hon. Jeffrey Lloyd, Minister of Education, addressed the scholars. This year some 150 public school graduates received scholarships to attend institutions in the United States and Canada for the 2019-2020 academic year. (BIS Photos/Raymond A. Bethel, Sr.)

NASSAU, BAHAMAS – Rayshon Neymour, a graduate of Anatol Rodgers, attended 10 schools throughout his life and had to overcome what may be considered insurmountable challenges. His parents were unmarried teenagers.  His mother did not attend her school’s graduation ceremony because she was pregnant with him.

“Almost every year I had to pack up my Georgie bundle,” he said.

“Although I may have been called ‘drift wood,’ I never felt that way.  I had a resolve to do my best to impact every school that I went to positively.  I believe that overcoming is an important part of being a public school scholar.”

There was a lot of pain behind Malachi McCoy’s smile.  A graduate of Doris Johnson Senior High School and former student of R. N. Gomez All Age School, Berry Islands, he faced financial problems.  Although his Dad was present, he and his seven siblings relied on their mother, who fights diabetes, to do everything.

Malachi had three experiences of almost being kicked out of school. He used basketball to create a pathway to become successful and was eventually elected Head Boy.

“Your gifts will make room for you,” he said.

Olano Thelusmar sacrificed study time to care for his siblings and went without eating to ensure that they ate.

“I literally put aside child’s play to be a role model to my siblings,” he said.

A 2019 graduate of C. I. Gibson Senior High School, Olano is the eldest of eight children.

“I had to come to the realization that life is filled with difficulties.  You never know how strong you are until being strong is the only thing you have in life,” he said.

This year some 150 public school graduates received scholarships through the Public School Scholars Programme (PSSP) to attend institutions in the United States and Canada for the 2019-2020 academic year.

“This year the Government of The Bahamas is spending $40 million in tuition assistance. With these great outstanding partners that we have from a number of universities, who are here present, and who I am sure you will meet in short while: this particular group we are spending over one and half million dollars in counterpart funding for your education. I am more than proud to do it,” he said.

“When I became the Minister of Education, and I give all credit to Mrs. Monique Hinsey. This brilliant, young lady, tireless in her work, started out with approximately 20 students. Today it is 150.  She started out with partnering with 3 or 4 universities. Today we are have almost 40.

“When the Scholarship Division was established the majority of the private school students were getting most of the scholarships, but we said what about our public school students.

“In my first meeting with Mrs. Hinzey I said we don’t want to restrict ourselves to the United States and Canada. I want you to go to China, New Zealand, Australia, Brazil, South America, Africa and find universities who want to partner with us so that we can have our children go all over the world in support and by the support of The Bahamas Government.”

Minister Lloyd urged the awardees to be thankful, to put cell phones down and not to forget that they are fantastic, magnificent and splendorous.

The PSSP was launched in 2015 to create college awareness and higher education opportunities to low income, first generational public school students, while connecting them to college access through institutional partnerships.

More than 513 students have benefited from the programme, which is a partnership between the Ministry of Education and approximately 30 colleges and universities.