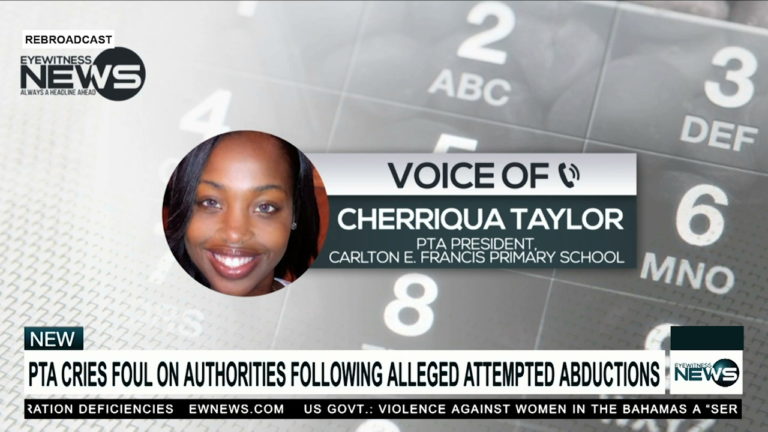 NASSAU, BAHAMAS – The head of the Parent-Teacher Association (PTA) at the Carlton E. Francis Primary School is speaking out after two students were the alleged victims of attempted child abduction.

The PTA president is now demanding answers from authorities, alleging that school officials failed to notify them of the attempted abduction, and she also outlined a number of security concerns that are plaguing the school.

PTA president, Cherriqua Taylor, told Eyewitness News Online last Friday that the incidents are ‘horrific’, and according to parents, only the student body was warned of the safety concerns at the school while parents were allegedly kept in the dark.

“A child was walking through one of the side shortcuts near the school, and a person allegedly tied a rope around a child and the child was screaming and ran back to school, the PTA president alleged.

“Now, when I spoke with the administrator, she said that it was only alleged as in the story was not verified. However, the police were called in because we do have police there at the school, and the officer spoke with the child, as well as the mother was called in as well.

“The children were alerted to say not to walk the side paths, and this was after 2:30 p.m.”

The PTA president also claimed that there was another alleged incident where a student was taken off a bus on Carmichael Road while heading to school.

“Now, I told the administrator that we should’ve given out letters, however, she said that she did not get a go-ahead from her district superintended to say if they should send out a letter,” the PTA president claimed.

According to Taylor, it is alleged that not only are safety troubles plaguing the school, but also facility challenges.

“We need a pedestrian crossing in front the school,” Taylor said.

“I’ve put in letters for that. We have an area in the yard that we need filled with pea rock because it’s full of dust.

“Where kids stand in the afternoon, there are no benches for the kids to sit on to wait on parents.

“These kids sit on the sidewalks. There is nothing.”

Eyewitness News Online attempted to reach out to the principal of the institution, but school officials said she was off the island on Friday.

Attempts were also made to reach the head of the South-Eastern Superintendent District at the Ministry of Education, but our attempts were futile.