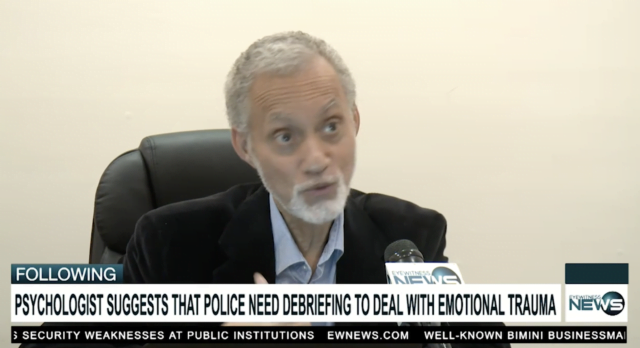 NASSAU, BAHAMAS – On the heels of the untimely death of a Royal Bahamas Defence Force Officer who was killed in the line of duty on Sunday, a local psychologist yesterday suggested that law enforcement agencies enforce debriefing sessions, particularly as officers may have to deal with numerous traumatic incidents on a day-to-day basis.

Psychologist, Barrington H. Brennen suggested that a lack of psychological care could have possibly led to Sunday’s shooting and if unchecked, can perhaps lead to even more of its kind.

“When persons on the defence force use guns, are they psychologically evaluated,” Brennen asked.

“What happens when there is an incident when an officer kills someone? Is there an automatic protocol that the officer goes through?”

Philip Perpall, 52, was shot to death on Sunday morning while guarding Mount Fitzwilliam, home of the country’s governor general.

Reports have alleged that the veteran Officer was shot by one of his collegues, but to date, such reports have not been confirmed by police.

Sunday’s incident has left many questioning  the training and security measures of officers, as well as their mental condition to effectively uphold the law as they carry out their duties.

“Some persons need to go to therapy, but others may just need to read a book,” Brennen told Eyewitness News Online yesterday.

According to Brennen, anger feels good to some persons and it is a very powerful tool.

“We are angrier than we should be, we are passive aggressive as a people, and when we get angry, we lash out badly, whether it’s verbal or physical,” Brennen said. “We may not be angry when compared to other nations, but I think it’s how we were modeled and taught.”

Brennen said anger starts in the home as a child may pick up certain behaviors from parents.

He also noted that many parents of yester-year did not parent effectively or they did not teach a child principles.

Brennen said many persons may also have unresolved anger issues that are not properly being treated.

Treatment, he said, must focus on one’s personal awareness, personal concepts and the ability to manage their internal self.