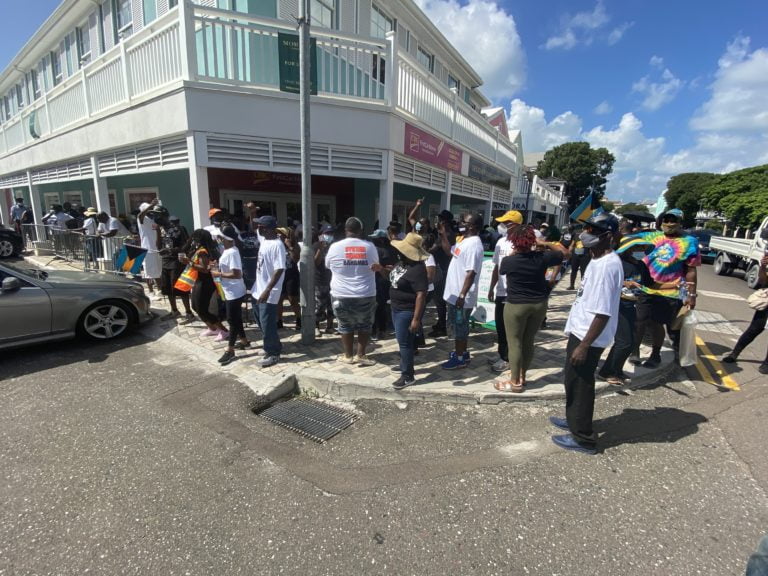 The unauthorized gathering resulted in the arrest of popular local comedian Wellington Roberts for unlawful assembly and resisting arrest.

“Listen to me carefully, I have over 100,000 followers,” he shouted as he was being hauled onto a police bus.

As he objected to the arrest, officers repeatedly told him to sit down and warned: “that’s another charge for resisting arrest”.

Officers who spoke to Eyewitness News advised that the crowd had been repeatedly warned to disperse.

The protestors’ previous attempts to march over the Paradise Island Bridge and to Parliament Square were prevented earlier that morning.

The House of Assembly met briefly during which the prime minister announced additional restrictive measures for New Providence and Abaco, due to increasing COVID-19 cases on both islands.

Parliament adjourned just before 11 am.

As Minnis exited the House of Assembly, the waiting crowd through Parliament Street descended as the prime minister was being escorted to his vehicle.

However, he did not stop to engage protestors, who shouted, “We tired of y’all”, “Just how y’all run us from Bay Street, we will run y’all from our House”.

Some shouted: “Minnis got to go.”

The employees have called on the resort to formally release them and pay them severance, having been furloughed since late March due to the ongoing pandemic.

Reforms to the Employment Act in 2017 mandate that once workers have been sent home for a 13-week period or 90-day period, an employer has to either recall them to work or terminate them with full compensation as required by law.

However, the emergency orders have suspended the redundancy provision, according to Bahamas Hotel Catering and Allied Workers Union Darrin Woods, who said the union will not push for redundancies.

Several members of Operation Sovereign Bahamas were also present at the demonstration.

Founder of the group Adrian Francis said they were trying to ensure that Atlantis workers were heard.

Mitchell insisted the government ought to intervene to ensure the workers get their money.

“The PLP left in place a law to protect workers from being laid off endlessly,” he said.

“The FNM changed the law using their emergency powers.

“This has worked an injustice on the workers at Atlantis.”

Outside the House, Centreville MP Reece Chipman also expressed support for the workers and their demonstration.

“This is a reflection of where we have been for many many years,” he said.

“…There’s an abuse of this same Parliament going on.

“It’s too much abuse. We are not creating laws in the best interest of the Bahamian people.”