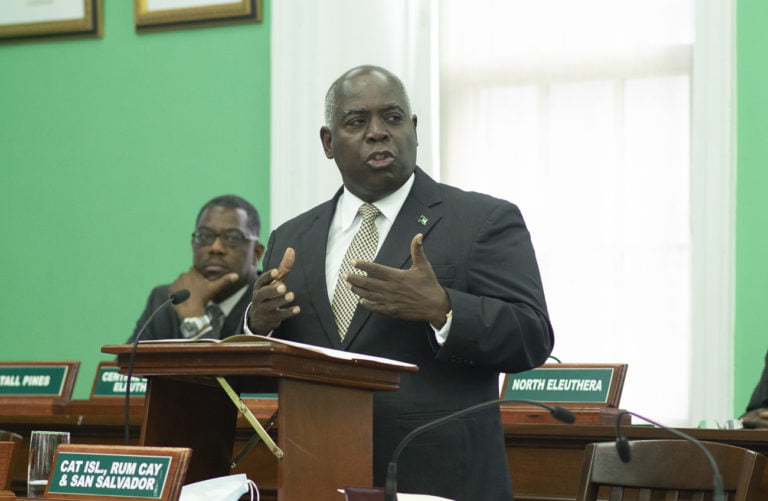 NASSAU, BAHAMAS — Opposition Leader Philip Brave Davis said yesterday that his party will not support another extension of the state of emergency, which has been in place since March, in order to mitigate the local spread of COVID-19 in the country.

Prime Minister Dr Hubert Minnis gave notice in Parliament of the government’s intentions to extend the public state of emergency to November 30.

The current order is expected to end on October 31.

“The PLP will not support another extension of the Emergency Proclamation to extend the sole competent authority’s power to control the lives of the Bahamian people until 30 November 2020,” Davis said in a statement.

“The PLP will not do it.

“The country has proclamation fatigue.

Davis noted that the country continues to record increasing cases of COVID-19 in recent days and more cases than other countries in the region throughout the entire pandemic.

“We must change course,” he said.

“What will it take for this Prime Minister to understand that a lockdown is not a plan? Yet again, he has revealed no plan.

“He employs the same failed strategy.”

“Our country has become a case study for how not to manage a public health crisis,” Davis continued.

“The prime minister seems to have run out of ideas or even interest. When reporters and the public have questions, he is nowhere to be found, sending out others to defend his failed policies.

“It’s agonizing to see other countries put in place science-based policies to protect their citizens while here our doctors and nurses are under siege, Bahamians are locked up every weekend, and suffering from the economic fallout has become widespread.

“We can’t keep failing – the costs are too high.”

He once again called for a major shift in the testing policy in order to identify cases quickly, trace their contacts, and break transmission chains.

“The prime minister must move quickly to adopt free testing – and if he won’t, he should explain why he believes that, as a deadly virus spreads, it is morally acceptable that a person’s wealth could determine their health,” Davis added.

“We can predict with near certainty the same tired excuses the prime minister will likely utter in Parliament [next week].

“He’s going to point to other countries struggling with second or third waves of the virus.

“A strong leader would look to the successes, not the failures, and be determined to make sure our country was among them.

“…The Bahamas can be a success story. The first step is to start testing enough to break transmission chains.”