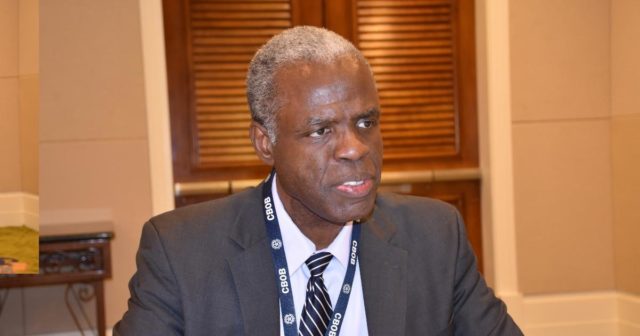 NASSAU, BAHAMAS — Total foreign currency inflows through the private sector in 2020 fell by almost 33 percent, according to Central Bank Governor John Rolle, who noted that a further drawdown on the country’s foreign reserves is expected over the first half of this year.

Rolle, who addressed the Bahamas Business Outlook yesterday, noted that with the toll of the pandemic, the Bahamian economy contracted by at least 15 percent in 2020 and is not expected to fully recover until possibly 2023.

“Although there is more clarity over when the recovery will start, considerable headwinds could remain in the very near-term, as developed countries cope with the most recent wave of COVID-19 infections and perfect their vaccination rollout strategies,” said Rolle.

“The possibility of not achieving sufficient inoculation coverage until early in 2022, places travel and tourism on a recovery path that would be strongest in the overlap between 2022 and 2023.”

Rolle noted that the government’s foreign currency borrowing has provided inflows to supplement the private sector’s need and bolster the foreign reserves.

“In 2020, total foreign currency inflows through the private sector, as measured from commercial banks’ purchases of foreign exchange, fell by almost 33 percent,” he said.

“Although expressed demand for foreign exchange to pay for imports of goods and services fell by approximately 13 percent, this left a shortfall of over $400 million that had to be provided from other sources. The gap was closed by net inflows from government borrowing, revealed in data on the net foreign currency transactions between the Central Bank and the government.”

He added: “There is no deliberate intention to grow the foreign reserves through the government’s debt operations. However, the reserves closed out 2020 above $2 billion, its highest end-of-year position on record.

“However, this was simply a matter of timing, as the government still had not fully drawn down its resources for spending. As this happens over the first half of 2021, and as the private sector’s needs stay above tourism inflows, balances will reduce.

“It is still expected, therefore, that the economy will exit the pandemic with less reserves than at the start of it. In addition, some net private-sector proceeds from Hurricane Dorian still remain to be withdrawn from the reserves, as the rebuilding is still proceeding slower than was expected.”

Rolle further noted that there have been continuous attempts to infer whether the Bahamian dollar was at risk of devaluation, because of the pandemic.

“The currency is not at such an imminent risk. This is because of the level of the reserves, both now and where they should resume their rebuilding,” said Rolle.

“These balances match slightly more than 100 percent of the Central Bank’s core liabilities, compared to the legally-mandated floor of 50 percent. The liabilities move in the opposite direction to the reserves, only when the bank lends to the government.

“However, there is increased policy discipline in this regard, since the 2020 Central Bank Act has imposed a comprehensive ceiling on how much the bank can lend to the government. When the reserves begin to be drawn down, it is projected to be the case again that Central Bank’s core liabilities will shrink.”

The Central bank governor noted that for domestic banks and credit unions, credit losses are therefore expected to increase this year.

“The spike in businesses with significantly reduced or eliminated revenues, and the sharply elevated unemployment, has placed a significant number of borrowers in deferred loan payment status at banks and credit unions or already,” said Rolle.

“Through November, almost 10 percent of private-sector loans at banks were in this state, although much reduced from one-third of exposures that were being accommodated in June of 2020. As 2021 progresses, and banks move further away from the end of the deferral period, more of these loans could become non-performing, against which lenders would begin to realize greater losses.

“However, the losses are expected to be much less than were experienced after the 2008 global recession. In this regard, the stability of the financial system is not threatened, because banks have more than enough excess capital to absorb losses; and confidence in credit unions is now bolstered by their participation in the Deposit Insurance Corporation and turnaround in tourism that would become more defined later in 2021.”