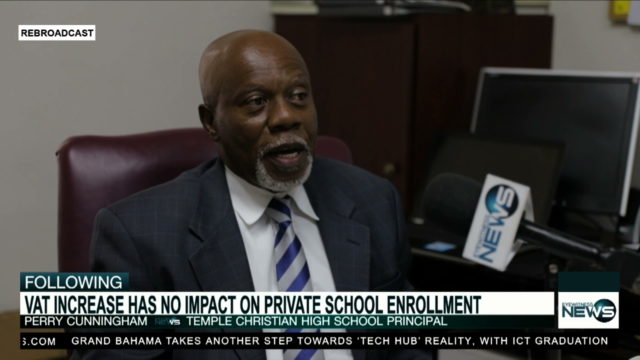 Private school administrators on Monday said the recent increase in value-added tax (VAT) has not affected this year’s enrollment.

Back in July, during the government’s 2018/2019 budget debate, Deputy Prime Minister and Minister of Finance Peter Turnquest announced that VAT would increase from 7.5 per cent to 12 per cent, leaving many Bahamians concerned about how the increase would affect their daily lives.

For schools such as Queen’s College (QC) and St. Augustine’s College (SAC), the increase has not affected their numbers.

“The line is always long for the kids trying to get into St. Augustine’s College,” said William Johnson, the school’s administrator.

“In fact, this year, we have an increase in enrollment so I don’t know that one could use the increase in VAT to gauge how we perform.”

According to QC administrators, parents are to date still attempting to enroll students.

Perry Cunningham, principal of Temple Christian High School said, he was pleased with the enrollment stats this year and noted several factors contributing to the increase.

“One of our selling points is the fact that we are so affordable,” said Cunningham.

“Some of our parents are [also] keen on coming to a safe and smaller environment that is Christian-based.

“We appreciate that and we see them coming more so this year that the last five years.”