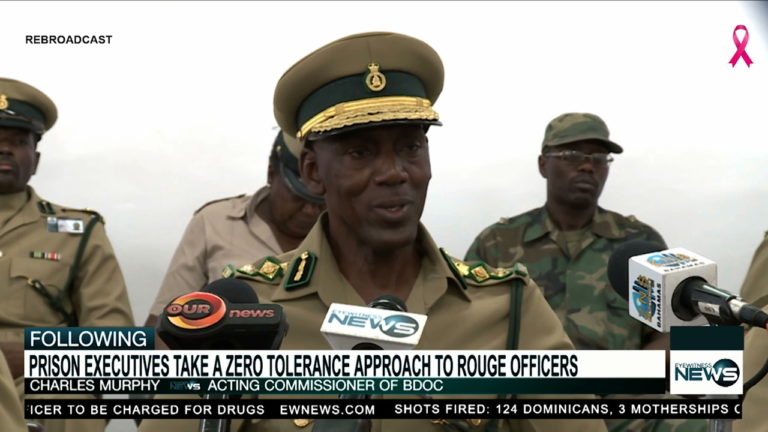 50 new officers to be hired to meet increase

More than 1,000 inmates are housed at the Maximum Security Unit at the Bahamas Department of Corrections (BDOC), well over the 200 limit the facility was built to accommodate.

Acting Commissioner of Prisons Charles Murphy, revealed these figures on Monday, noting that the institution is preparing to accept 50 new officers to oversee the growing numbers.

He, however, would not reveal the present officer to inmate ratio, only telling members of the media that at any given time the facility is adequately staffed with officers to man the compound.

This comes on the heels of several prison officers being charged before the courts for drug possession. Murphy said that despite stringent measures in the vetting process, many “bad apples” fall through the cracks.

“You can never be 100 per cent when you are recruiting,” Murphy said. “Most persons when they are being recruited put on their best face and give you the best story. They have the best references with creditability and that is mainly what we go on…as a result, we end up with some persons that we shouldn’t have in our organization.

He pointed out that those recently charged have been young officers who would have served less than five years with the organization.

“There are a minute portion of the staff who seek to get ahead financially by carrying out these acts,” Murphy explained. “I don’t know why an individual would throw away [his or her] career. I would like to know what the price is.”

Murphy added that a number of special operations have taken place at the prison, yielding significant results with contraband including drugs and cell phones being confiscated from inmates and officers.

Earlier this year Eyewitness News reported on the poor state of the correctional facility, which included the use of sloop buckets by prisoners, buildings in dire need of repair and overcrowding.

Permanent Secretary in the Ministry of National Security Eugene Poitier announced that a new facility is part of major changes expected to take place at the Bahamas Department of Corrections (BDOC).

Last month, however,  National Security Minister Dames said the government is taking a research-driven approach to the issue.

“We don’t want to spend money for spending money sake. We want to modernize and professionalize the prison,” Dames said.