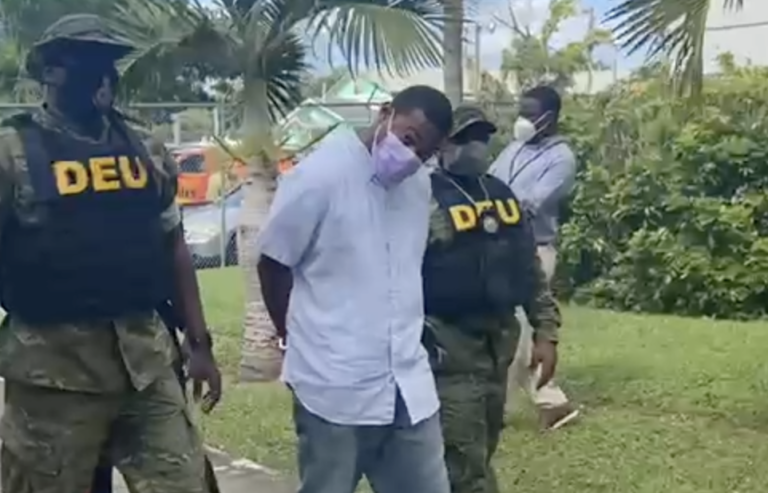 NASSAU, BAHAMAS — A prison officer was arraigned in the Magistrates Court today on charges of possession of dangerous drugs.

Ivan Forbes, 26, appeared before Chief Magistrate Joyann Ferguson-Pratt and was charged with three counts of possession with intent to supply.

Forbes pleaded guilty to all charges.

Prosecutors alleged that on November 16, 2020, officers of the Drug Enforcement Unit were called to the Bahamas Department of Corrections after receiving information.

Upon arrival, officers spoke to Chief Corrections Prison Officer Curtis, who pointed out Forbes to them.

A search was conducted of his person and three black taped packages were found and removed from his inner jacket pocket. The packages weighed five ounces and had a value of $400.

Officers also found $78.65 in his right pants pocket, which was confiscated and suspected to be the proceeds of crime.

Forbes was arrested and taken to Fox Hill police station for further investigation.

The same day, Forbes along with the officers went to a residence at Ghana Circle, Elizabeth Estates, and pointed out a white Honda Accord, whose back trunk he used the keys to unlock.

A search was conducted of the trunk and officers discovered a white cooler box containing a brown paper bag, which had two black taped packages of marijuana.

After being cautioned, Forbes told officers, “They mine. No one know I had them in here”.

The drugs weighed seven and one-eighth ounces and had a street value of $580.

The prison officer also took officers to a second location on Moonshine Drive, off Baillou Hill Road, where he pointed out another vehicle, a silver Nissan March, produced the keys and unlocked the front right door.

Upon search of the interior of the vehicle, officers found another brown paper bag under the front right driver’s seat, which contained two black tapped packages containing marijuana.

In his record of interview under caution, Forbes admitted to being found in possession as well as ownership of the drugs weighing one pound and six ounces, with an overall value of $1,820.

His attorney, Jomo Campbell, told the court that the law enforcement officer has no previous convictions, no pending matters, has been married for four months and is the breadwinner of the family.

Campbell also indicated that Forbes has been a severe diabetic for over four years.

He pled with the court to be as merciful as possible and take into consideration that the quantity of drugs was small and that Forbes will likely be fired and stands to lose his benefits and pension after seven years.

Ferguson-Pratt told the prison officer that he has found himself in some “hot, hot water”.

“There can never be a justifiable reason for an officer in enforcement to be breaking the law,” she said.

The chief magistrate further put forth that Forbes’ actions seem to be a course of conduct that he was engrossed in.

“That’s an affront as a prison officer to go on your job with drugs on your person,” she continued.

“What were you thinking?

“There must be a higher call for you to obey the law and uphold the penal code.”

She noted, however, that she will take into consideration his health condition, the quantity of drugs, his clean record and the fact that he took responsibility and worked with police.

“I can look at your demeanor and I can see you are remorseful and are very embarrassed. But if you break the rules, you must be prepared to face the consequences.”

Ferguson-Pratt said the court must send a clear message of determent to would-be offenders and have zero tolerance towards enforcement officers who are trusted to implement the law.

Forbes was sentenced to seven months in prison on all three charges, which will run concurrently, and fined $6,000.

Failure to pay the fine by the end of the prison term will result in another 12-month sentence.