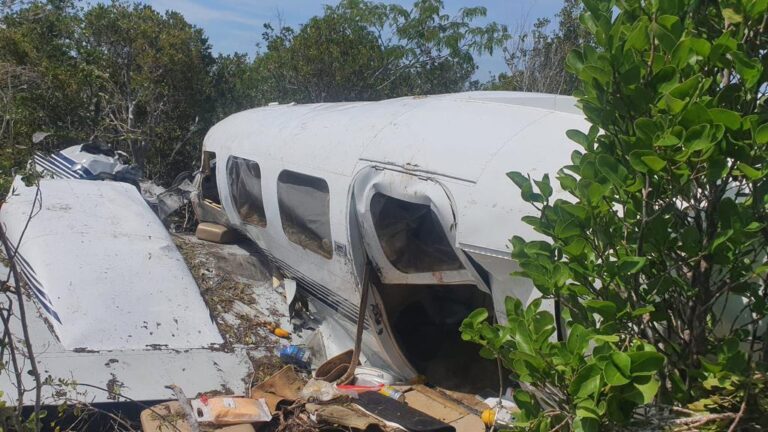 Investigators expected to determine cause of accident after further analysis

NASSAU, BAHAMAS — Aleitheia Newbold, who died as a result of injuries sustained during a crash landing on Deadman’s Cay, Long Island, earlier this month, was ejected from the aircraft and found lying on the ground by other passengers as she went in and out of consciousness, according to the Air Accident Investigation Authority’s (AAIA) preliminary report.

The AAIA said the pilot, Brad McPhee, reported that shortly after takeoff and the aircraft’s gears retracting, he observed a warning light that indicated low oil pressure.

The pilot attempted to return to the airfield, but the right engine power also began to decline.

The pilot advised passengers to brace for impact.

The AAIA said he and several passengers interviewed confirmed that an alarm was heard throughout the ordeal up until the aircraft made contact with the surface.

The aircraft crashed into several trees before impacting the ground, coming to halt approximately 75 feet after initial contact with the trees.

It was found approximately two nautical miles from the Deadman’s Cay Airport in dense brush.

The pilot and five of the passengers were able to exit the aircraft when it came to a stop.

But Newbold, who was sat at the rear of the aircraft, was found approximately five feet from the rear door of the fuselage by other passengers as they exited.

“She appeared to be unconscious and the pilot along with another passenger rendered assistance,” read the preliminary report.

“Initially it seemed that she drifted in and out of consciousness and later appeared to be in distress.

“Life-saving measures inclusive of CPR were utilized, but were unsuccessful and she subsequently succumbed to injuries sustained as a result of the crash sequence.”

As it relates to the cause of the accident, the aircraft was recovered from the scene and transported to the United States.

AAIA investigators and investigators from the manufacturer of the aircraft and engines are expected to conduct further inspections and analyses to determine the cause of the accident.

The AAIA conducted an onsite investigation on June 6.

It said that based on the distance from the runway of departure and the crash site, the aircraft may have been airborne for approximately two minutes and may have reached an altitude of 100 feet to 200 feet.

It said the right-wing of the aircraft appeared to have made the first impact with the trees.

According to the AAIA, shortly thereafter, the fuselage of the aircraft and the left-wing made contact with the ground and surrounding trees.

It said the density and thickness of the trees in the area where the aircraft crashed, limited the distance the aircraft traveled after impact with the surface.

The passengers were able to make contact with search and rescue as well as other personnel to render assistance.

According to records obtained from the Federal Aviation Administration (FAA), the pilot was issued an Airline Transport Pilot License (ATPL) with airplane-single and multi-engine land and instrument airplane ratings.

Records obtained from the FAA, showed that the pilot was in possession of a first-class medical certificate issued in May 2016.

According to the authority, the weather conditions at the time of the accident were daytime —— visual meteorological conditions.