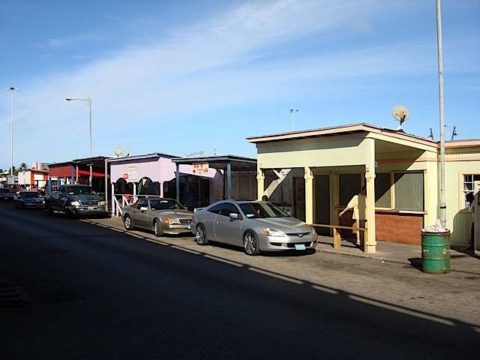 NASSAU, BAHAMAS – Once booming and vibrant, Potter’s Cay Dock has now been reduced to a ghost town as many stalls are closed and there is limited business.  It’s a situation that led irate vendors to claim yesterday that the downturn in business is the result of government’s neglect as well as police harassment.

After two men were murdered in front of a stall on Potter’s Cay Dock back in May, police significantly increased their presence in the area and blocked patrons from parking in front of stalls, but President of the Bahama Docks and Allied Venues Association Dwain Bastian said the move has cost vendors to lose 90 per cent of their business.

“A lot of employees were fired, a lot of shops were closed because of this reason, it’s supposed to be the people’s time, but who people, because no one is checking for us.”

Last year the government announced plans for a Public Private Partnership to develop and manage Potter’s Cay Dock, however President of the Potter’s Cay Dock Fish Food and Vendors Association said vendors are not on board with this idea.

Meanwhile, Progressive Liberal Party leader Phillip Davis, who toured the area yesterday, said the government should give the vendors a break on rent – of 42 dollars a month- until their issues are resolved.

“This is not about PLP or FNM, this is about Bahamian vendors who need help and assistance,” Davis said. “A number of these stalls are closed and the government insists on collecting their rent, but again, how will they get rent when nothing is coming in to them?

“They need help and I hope this government will give them the help that they need.”