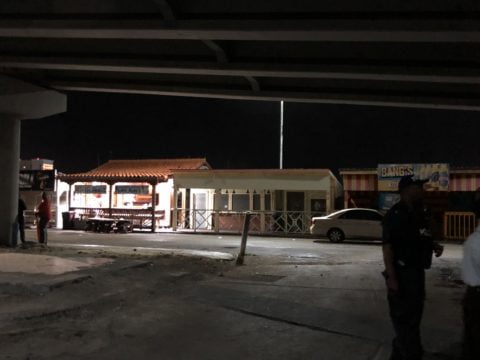 NASSAU, BAHAMAS – In the wake of another fatal shooting which unfolded at Potter’s Cay Dock on Wednesday night, management at the local cultural hub maintain that the area is still a safe and family friendly environment.

Gregory Minnis, Manager at Potter’s Cay Dock, told Eyewitness News Thursday that the brutal killing of two men on Wednesday was unfortunate, but does not paint an accurate picture of the type of environment at the dock.

According to Minnis, the environment is safe.

“I feel that Bahamians should feel free to come on Potter’s Cay to sit and eat their conch salad, conch fritters and enjoy themselves,” he said.

“A lot of things will be happening here on Potter’s Cay and we have been upgrading this area since mid-last year. We are saying to our patrons don’t stay away, please continue to come out and enjoy this area.”

He told media at the scene of the crime on Wednesday night that, in spite of a number of violent incidents which have unfolded in the area within the last several months, police have not listed it as a crime hotspot.

“I don’t know that we call this a hotspot; this is a place where people come to enjoy themselves and we want everybody to be safe and feel free to move about and enjoy themselves,” Rolle responded.

“We will do what it takes, as much as possible, to make sure people are safe.”

Unconfirmed reports suggested that the men who were killed in Wednesday night’s bloodbath were Tario Lockhart and Merric Russel, also known as “Mock.”

According to police, sometime after 8:00 p.m. on Wednesday, the duo was at Island Delight on Potter’s Cay Dock when they were approached by another male.

Police said an altercation erupted between the trio.

Authorities said at some point the man that approached the duo drew a weapon and fired shots.

The assailant fled the scene on foot, according to police.

Both men were pronounced dead at the scene of the crime by Emergency Medical Services personnel.

Management at Island Delight issued a press statement Thursday morning to inform their patrons that the business would be closed to allow police investigations to proceed.

“Our business will remain closed until police provide the all clear,” the statement said.

“We wish to assure our valuable customers that Island Delight is a well-respected, peaceful establishment and an incident on this scale is rare. We apologize to our customers who will be impacted by our closure.”

The shooting deaths on Wednesday night were recorded as the country’s 29thand 30thmurders.