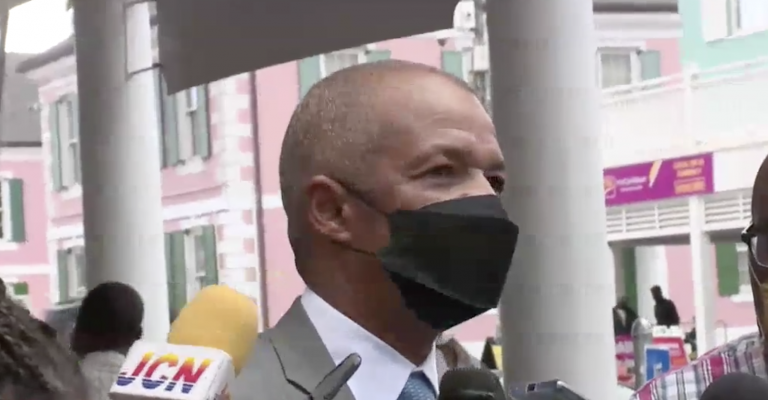 Minister of State in the Office of the Prime Minister Myles Laroda.

NASSAU, BAHAMAS — Minister of State in the Office of the Prime Minister Myles Laroda said yesterday that the government’s priority as it relates to disaster management is to provide aid for thousands of residents on Grand Bahama and Abaco who have received no assistance since the deadly 2019 storm.

Hurricane Dorian, which has been declared the strongest storm to ever hit the country, ravaged Abaco and parts of Grand Bahama in September 2019 as a Category 5 storm. The storm claimed the lives of 74 people, to date, and was estimated to cause some $3.4 billion in damage.

Laroda, who now has responsibility for disaster management, told reporters outside Cabinet that after touring the impacted areas, there still remains “a lot of work” to do.

“There are still thousands of individuals who would have applied from assistance ranging from $10,000 to $25,000,” he said.

He explained that areas such as Moore’s Island, with less than 700 residents, require the most work, with very little infrastructure left on the island.

Laroda noted that the airport terminal is not fully functioning and the clinic on the island is dilapidated with leaks and multiple challenges.

He also pointed out that all of the assistance received by those outer Abaco Islands, including Hope Town and Man-O-War Cay, were done through NGOs, private donors, or second homeowners.

As for Grand Bahama, Laroda said that several storm-struck areas remain in disrepair, including Sweetings Cay where individuals are still living in tents.

“A lot of them have been relocated, but it’s fair to say thousands are still waiting for government assistance for damage done to their homes,” he said.

Asked about the shortfalls in the disaster response to the storm, Laroda said there seemed to be a lot of “chaos”.

“Dorian was a monster storm. In its aftermath, you had a lot of chaos on the ground. Some assistance was given. It’s also fair to say that as you tour those affected areas, the one narrative you keep hearing is there was no assistance provided by the government.”

The government in late 2019 declared the Abacos and the island of Grand Bahama special economic recovery zones to provide businesses and homeowners in the areas impacted by the deadly Category 5 Hurricane Dorian with a number of tax breaks and concessions.

Notably, the SERZ order provides a tax waiver on the import of vehicles to replace those that were lost or damaged during the monster storm.

Laroda added yesterday that while they are not indefinite, those concessions will remain in place until those areas return to “normalcy”.

“As long as those areas are affected and until we have “normalcy”; until we are at the point where we can say all that could be done from a government perspective has been done.

“Even though cameras left, there’s still a lot of people in need.”

He assured that the government’s main priority is to bring assistance to those individuals who have not received any assistance yet as soon as possible.