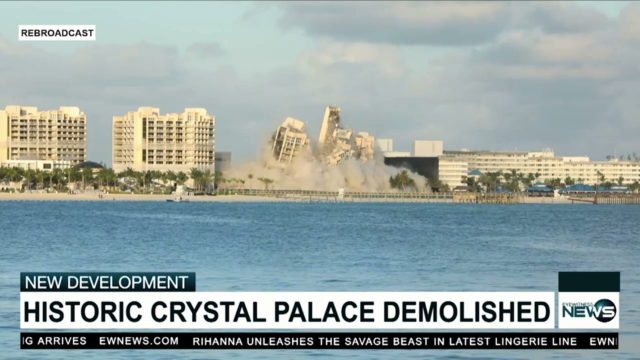 Expected to be replaced by new water amenities

The implosion of the Wyndham Crystal Palace Resort and Casino’s three towers on Monday morning will make way for new water amenities for the Baha Mar resort, sources confirm.

The resort is expected to make an announcement about the new development in the near future.

The towers were imploded at 7:30 a.m. on Monday. Lenovo Construction was responsible for the demolition.

“The entire Lenovo Construction team is pleased to confirm that the planned induced collapse of the three towers of the former Crystal Palace was completed successfully,” said Rondon Williams, Director of Lenovo. “We are grateful to the Bahamian government and the various law enforcement agencies who worked on the preparation, planning and safe execution of the demolition of the Crystal Palace property earlier today.”

Robert Sands, who has worked on the Cable Beach strip for some 40 years, said the demolition of the resort brought an end to another Bahamian touristic icon.

“I’ve been a part of the Cable Beach family since 1970 and have witnessed the renaissance of Cable Beach,” Sands said.

Whether young or old, Bahamians from all walks of life found a place to enjoy at the resort.

“The Crystal Palace offered a venue for a wide range of Bahamians. It had multiple food and beverage outlets, but it also housed the Rainforest Theatre, which was cabaret on Cable Beach that afforded cultural icons the opportunity to dance and entertain thousands of tourists in the hay day,” he recalled.

Well-known Bahamian dancer Lawrence Carrol shared that the time he spent at the Rainforest Theatre as a professional dancer was like a dream come through.

“I was fresh out of college and didn’t know what I would do next. I started teaching during the day and dancing in the night and it provided great employment by opening up doors in entertainment to work and be paid for what we do,” Carrol said.

Sands confirmed that it will take some time to remove the debris from the implosion site, however, clean up teams are making good headway with the cleanup process.