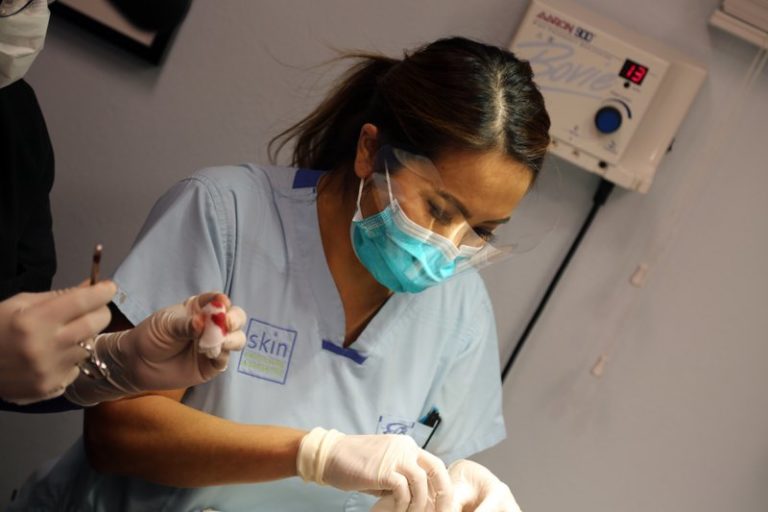 This photo provided by Discovery Communication shows Dr. Sandra Lee during a procedure on the new show on TLC called “Dr. Pimple Popper.” On the show, Lee sees patients with real medical issues like giant, painful cysts that affect their daily lives and self-esteem. Lee has nearly 4 million subscribers to her YouTube channel where she films herself squeezing pus from acne. She believes so-called “popaholics” are drawn to her popping videos because they like closure and even find the videos soothing.

NEW YORK (AP) — The online video star named Dr. Pimple Popper, who films herself squeezing pus from acne, is a different kind of voyeur when she’s off the clock.

Dr. Sandra Lee likes to search for mukbangs, a Korean term for people who film themselves eating large amounts of food while interacting with the camera.

“I’m just shocked at how much food that they’re eating,” laughed Lee in a recent interview. “I’m like, ‘Look at them — they’re stuffing their face with all those noodles.’”

Her tastes also swing to, of all things, primitive technology videos. She watches a man who makes a hut out of clay. “He builds clay tile and builds a kiln to fire the clay,” she said. “Those are real YouTubers who are working so hard for their videos. Mine are just videos for people who walk into my office.”

She may think her videos are easy gets, but she’s got an audience. The Dr. Pimple Popper YouTube channel has nearly 4 million subscribers and more than 2.5 billion views.

Her videos are so popular, showbiz naturally wanted a piece of the action. Lee now has her own show, also called “Dr. Pimple Popper,” airing Wednesday nights at 10 p.m. EDT on TLC.

The series isn’t just pops, it introduces viewers to the patients first. People with medical issues like large cysts that affect their self-esteem and their lives.

“These are big cases,” said Lee. “We have people who have real things that are different, that stand out and are shocking and we’re making them look normal. It’s a feel good thing.”

And if you’re squeamish, Lee advises, “just look away for a little bit.”

AP: Why do you think people are so drawn to your videos?

Lee: I think there’s a sense of clearance that you’re getting rid of something. It relaxes people. A lot of people watch them as bedtime stories, to decrease their anxiety. If you want things to be clean, it really makes you feel like things are being put back into place. I also think some people get drawn in because it’s fascinating to them.

AP: Is it possible to actually get an appointment with you now that you’re so known?

Lee: People come to my office now from Africa, from Asia, from London, from Canada because they’ve watched my videos and they want me to be the one to see them. It’s very humbling but it’s very strange. I don’t want them to come that far. I’m extremely flattered but there are thousands of dermatologists between me and them.

AP: Do you get recognized in public?

Lee: It’s interesting. I probably get recognized more for my voice because in my videos you hear my voice more than you see my face. … I was on a plane in Mexico and this girl tapped me on the shoulder and said, “Are you Dr. Pimple Popper?” She’s like, “I heard your voice and I just looked around and knew that was your voice.” That happens all the time.

This article was written by ALICIA RANCILIO, Associated Press writer.