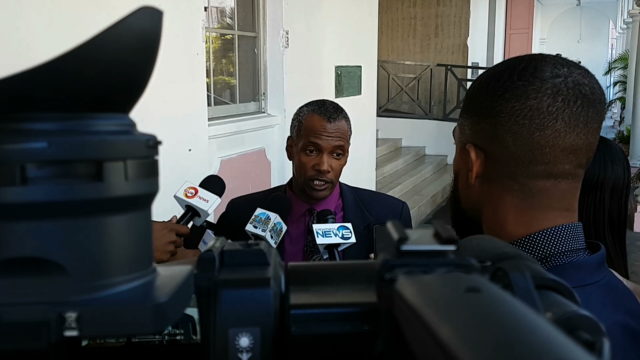 Bannister, who is responsible for the Straw Market Authority (SMA), told Eyewitness News yesterday, that a significant number of vendors participated in the protest while the majority of vendors remained in their stalls.

Irate vendors called on Bannister to remove SMA Chairman Kelly Ingraham. They also claimed that many of their issues were not being addressed.

“I was disappointed to see several political operatives and activists in their midst.” Bannister said.

Vendors also protested the fact that some of them were being shut down, while others were still allowed to operate despite having a balance.

Bannister addressed the concern and stated that when the Free National Movement (FNM) came to office, it met a large number of vendors who had not paid their rent for years.

“The receivables were staggering despite the fact that the rent is only $37.50 per month,” he said.

“The board has been very lenient with vendors who were in arrears, and the vast majority of them have complied with requests to make financial arrangements.”

What is noteworthy Bannister said, is that many who participated in Wednesday’s protest, have not honored agreements that they signed.

He urged those vendors to remain current.

Straw vendors also took issue with insufficient lighting at the Straw Market on Bay Street, which Bannister said, is now being addressed.

“The lighting issue is important, and is being addressed,” he said.

“It is critical to appreciate that this issue has impacted the Bay Street market for several years, and that the FNM is the only administration to address it. Moreover, when I met with vendors, they were assured that the issue was being dealt with.”