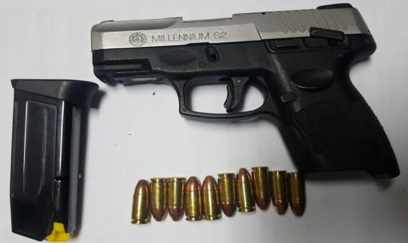 NASSAU, BAHAMAS – Two men were taken into custody on Wednesday, May 22, after an illegal firearm and ammunition was recovered.

According to police reports, shortly after 8:00p.m. on Wednesday, Drug Enforcement Unit Officerswere on patrol on Dead Cat Alley off Masons Addition, when they observed two men sitting under a tree.

The men, upon seeing the officers, began acting in a suspicious manner.

Officers conducted a search of the men and a nearby abandoned vehicle, recovering a

9-millimeter pistol and 10 rounds of ammunition.

The men were taken into custody and investigations are ongoing.