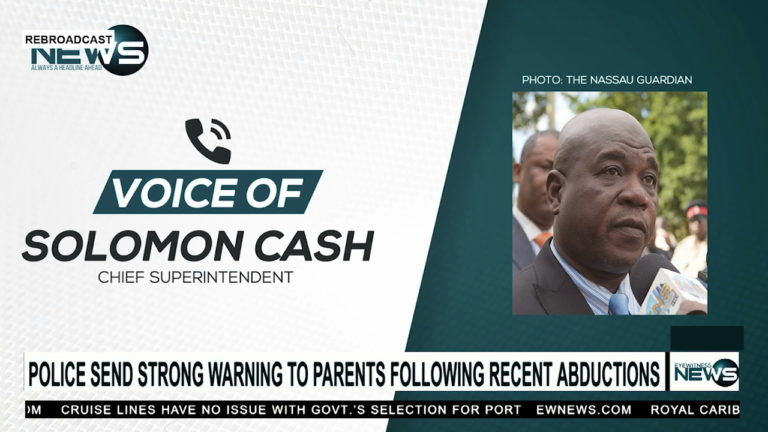 NASSAU, BAHAMAS – After four child abductions were reported last week alone, officer in charge of the Central Detective Unit, Chief Supt. Solomon Cash has assured that police are probing several angles, and he is confident that a suspect would be identified soon.

“We are going to release another composite sketch and this sketch is similar to that of the sketch that we released,” said Cash in a telephone interview with Eyewitness News.

“We have our investigative teams in all of the areas canvassing, so much so that we have already put together some additional strategies, which is a bit covert and we don’t want to disclose all of the details of that strategy at this time, but you will see more evidence of officers [in areas],” Supt. Cash said.

“As you know, parents allow their kids to walk freely throughout the community in a lot of communities, so we are asking adults in these areas, and also parents who know their child has to walk from school, to be more cognizant and more alert when it comes to the whereabouts of their kid.”

As of last week, a total of five alleged abductions were reported to police in the span of three weeks.

In this latest incident, Supt. Cash clarified that three little boys were walking home in the area of Kool Acers last Thursday evening when a silver car pulled alongside them and offered all three of them a ride.

According to Cash, the boys declined the ride but the female driver insisted.

“What she did was drop two of them off and kept one in the vehicle with her and she drove off with that one. That is the one we found last night (Thursday) in the area of the city dump,” Supt. Cash explained.

As of Friday, the CDU chief said they were on top of the investigation.

He did admit, however, that Bahamians should be concerned as one abduction incident is one too many; especially when it comes to kids.

The CDU chief, therefore, urged parents to keep a close eye on their kids to prevent an abduction from happening.

“Fortunately, no harm was brought to any of these kids but who knows the intent of this perpetrator? Who knows the motive behind all of these incidences? We have not established that but I can tell you that we are up and about in these communities and hopefully we will be able to be more conclusive as to who is responsible for these matters,” Supt. Cash said.

“It is very challenging for an investigation to be conclusive as it relates to what is actually happening and this is why we are advising parents to be more concerned and supervise their kids better because we don’t want any harm to happen to these kids.

“I know all the communities are on edge because they are kids and they are just disappearing from communities and being dropped in isolated locations, so that’s a concern.

“We don’t want anything to happen to these kids so we have all of our resources out there to prevent any other incidents from happening like this.”