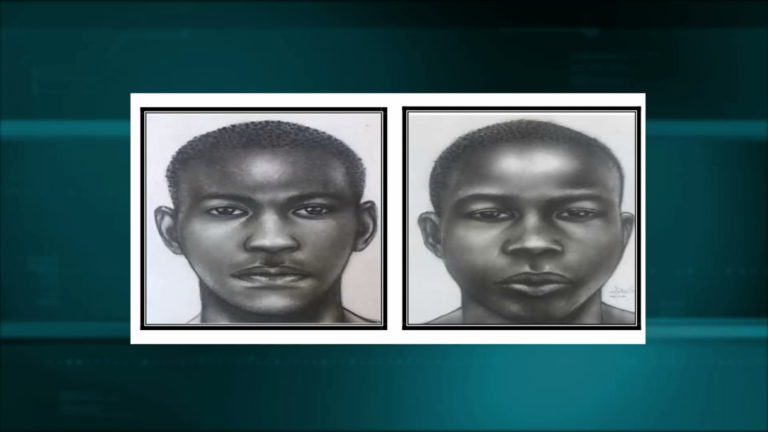 An artist rendering of the two suspects being sought by police.

Two underage females were allegedly sexually assaulted one week apart and police believe that the same man may have committed the crime.

Police confirmed yesterday that the first incident occurred last week on May 5 in the area of Bahama Avenue, off Market Street, while the latest incident took place May 15, shortly after 3:00 p.m., on Darling Lane off Wulff Road.

Head of the Central Detective Unit (CDU) Chief Supt. Soloman Cash, told Eyewitness News, that based on the modus operandai in each incident,  police believe that the same suspect is involved.

He also shared that the minors reported the alleged sexual acts to their parents who reported the matters to police.

Eyewitness News visited the Darling Street area yesterday where residents were distressed over the matter claiming that this was a first for the community.

Community leader Craig Smith said he and the Southside Boys Junkanoo group, after hearing of the alleged incident, cleared down the bushy area where the matter reportedly occurred.

“Everyday we are out here trying to assist with the children that live around here and we try to give back,” Smith said.

“When we heard about it, for the first time you saw grown men cry, because we really can’t believe that something like that happened because this is a tight knit community.”

Another resident said that he had just started to let his 10-year old daughter walk along to the grocery store, but now, he said that will change.

“We have to pull back on that,” he said.

“We can’t have the kids out here along and these things are happening. It’s really sad. If it was my child, the person who did it would be dead.”