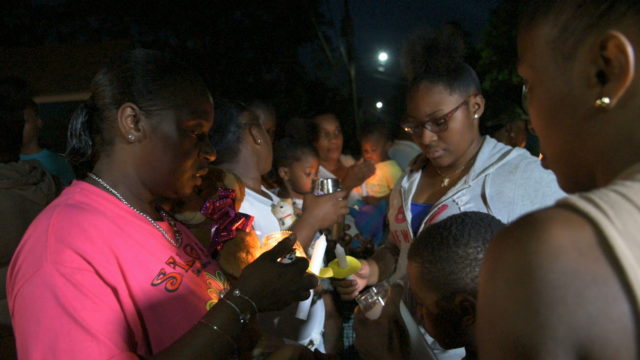 Vigil participants light candles as they prepare to walk about the Masons Addition area yesterday evening.

An overwhelming number of residents in Masons Addition turned out for a candlelight vigil on the community park in support of the family of 20-year-old D’Angelo Evans last night.

Evans was shot and killed by police on Sunday while heading to the store for his grandmother.

Hundreds of Residents marched with their candles lit on East street, while singing “Heal the world’.

“I’ve never seen a turnout like this,” Carlos Reid, a prominent violence and crime activist said as he spoke to residents reminding them to stay unified.

Reid said while he as hosted big events such as “Peace on the Streets”, he marveled at the small community and their numbers.

“I can’t believe how many people are here and how peaceful they are.”

Pastor Cyril Sands of Miracle Life International Centre told the vigil, “The sad thing is that police officers are a part of our families too.”

“They have to be held accountable,” the prominent area pastor said.

“We have to do the right thing.”

Many of the family members claimed they still haven’t heard from the police since the incident happened.

Tune into Eyewitness News tonight at 7pm for the complete story.