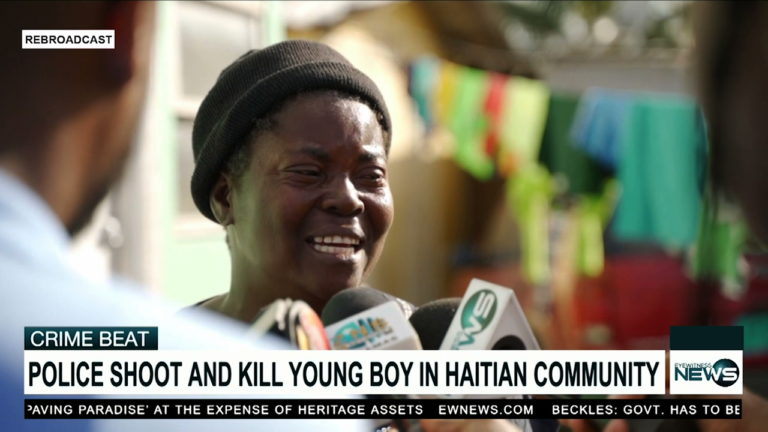 NASSAU, BAHAMAS – The first police-involved killing for 2019, which unfolded in a Haitian shanty town in eastern New Providence on Wednesday afternoon, has left a young male dead.

His family is now calling on police to provide them with answers as to what led to the deadly incident.

Chief Superintendent Solomon Cash, head of the Central Detective Unit, revealed that the young man was wanted by police for a number of serious criminal offences.

He confirmed that police launched a hunt for the young man and blanketed the area with officers Wednesday afternoon in an effort to find and arrest him.

“Sometime after 1:25 p.m. on Wednesday, police launched a manhunt operation in this area to locate a wanted suspect who was wanted by police for several violent crimes,” he said.

“Officers went in several directions in the houses in this shanty town when they encountered the suspect.

“The officer approached the suspect and identified himself as a police officer. The suspect then produced a long blade silver knife and attacked the officer.”

Chief Supt. Cash said the two males got into a scuffle and the officer, in fear of his life, subsequently drew his weapon.

“The officer was trying to disarm the suspect however the officer, being in fear of his life at the time, produced his service revolver and shot the suspect several times which resulted in him succumbing to those injuries,” he said.

Authorities suggested that the deceased was between the age of 20-25, but residents in the area claimed that the young boy was only a teenager.

The shooting incident sent shock waves throughout the Haitian shanty town on Wednesday.

Residents wailed loudly as the undertaker removed the young teen’s body from the scene.

The deceased’s mother, who only provided her first name ‘Zinik,’ to media on the scene, shared that her son’s name was Benji.

Visibly shaken by the entire ordeal, Zinik, while speaking to media outside of her residence in the Haitian shanty town, shared that her son was not a troublesome individual.

In fact, Zinik painted a contrasting picture of the young boy that police labelled as a criminal.

“Earlier he told me, ‘mommy, you hungry?’ I had one cents in my pocket and he give me money to buy food,” she shared.

Zinik explained that Benji was the provider in the home for he and his three siblings.

The distraught mother cried while telling the media that her son often complained that police unfairly targeted him.

“Every time police come in the back, sometime they come and beat him. Every time I tell him, don’t fly [run] from them. Don’t fly [run] because you won’t get anything [solved] like that,” she said.

A resident in the area, who wished to remain anonymous, told Eyewitness News Online a completely different story.

The male resident agreed that Benji often ran from police, but suggested that it was because he was a problem within the community.

“They [police] was looking for him for a very long time and he was a suspect involved with criminal activity and they came here and saw him and he ran like he usually does; because he always run from them [police],” the male resident said.

Another male resident, who came to Benji’s defense, alleged that the shooting incident was a targeted attack on the young boy.

“I was here last night when the bey [officer] say out he own mouth that he was coming here to kill him. That was around nine something he say, ‘you, I ga kill you bey,’” the resident alleged.

Chief Supt. Cash confirmed that the Coroners Court will have to investigate the matter, hear both sides involved in Wednesday’s shooting and eventually determine if the police officer involved in the shooting incident acted within his right to shoot and kill Benji.

Authorities confirmed that the officer involved in the shooting death was not injured during the incident.

Chief Supt. Cash also put residents in the shanty town community on notice that authorities will be back to sweep the area to ensure that it is rid of illicit activity.