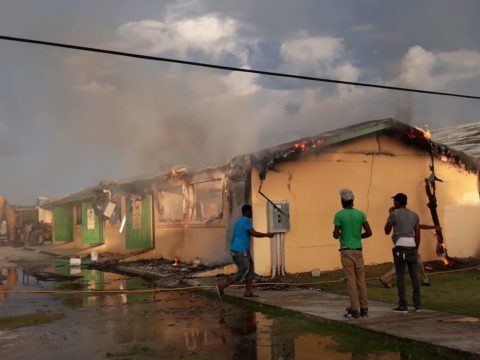 NASSAU, BAHAMAS – Police on the island of Andros are investigating a fire that caused extensive damage to the Mathematics block of the Huntley P. Christie High School in North Andros on Wednesday, June 12, 2019.

According to police reports, shortly after 4:00p.m. on Wednesday, Andros Division Officers were on patrol in the area of the School, located on Queen’s Highway in Nicholls Town, when they discovered the center block of classrooms on fire.

Police said officers and volunteers from the community extinguished the fire, which completely destroyed two classrooms.

No injuries were reported.

Fire Service Officers from New Providence were expected to travel to Andros on Thursday to continue their investigations.

Eyewitness News spoke with district superintendent for the area, Monique Bowleg, who reported that if it were not for the quick action of community members, staff and teachers, the blaze could have been worse.

Bowleg said education officials are expected to visit the island this week to access the damage, and it is hoped that repairs can be made before the start of the new school year in September.

A statement released last night from the Ministry of Education outlined that the school, which has a population of 396 students, was in the process of administering final exams but teaching time was not hampered when the fire erupted on Wednesday.

“The Ministry of Education has commenced an investigation into the cause of the fire, which severely damaged the school’s Mathematics block, and will be making a public statement when that investigation concludes,” the Ministry’s statement said. “In the meantime, the Ministry advises that the school has remained open and all of the students were able to complete their final exams.”

The ministry said the Huntley P. Christie High School closed for the summer break for students yesterday, June 13, and the school year will end for teaching staff on Friday, June 21.

“The commencement of clean-up efforts will begin as soon as the investigation to determine the cause of the fire is completed,” the ministry said.