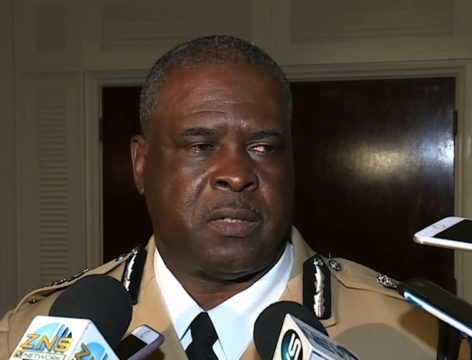 “We are following some leads with respect to that, but I am not yet satisfied that we have the kind of level of comfort that I would want to say anything else on that,” said the Commissioner at a press conference held yesterday at the Central Detective Unit.

According to police reports, shortly after 12:00p.m., police were alerted to reports of gunshots in the area of Jupiter Way in Star Estates. Shortly thereafter, the lifeless body of two adult males was discovered lying on the ground outside a residence on Jupiter Way with injures. Paramedics were called to the scene and attempted to revive the men, but they were unsuccessful.

Both males were pronounced dead on the scene.

As of Sunday, police did not confirm the identity of the two men shot, but Eyewitness News Online understands that one of them is Ian “Irie” Porter who was said to be known to police.

According to police reports, shortly before 11:00p.m. last Thursday, police were alerted to reports of gunshots in the area of Calvin and Linkford Streets off Soldier Road. Shortly thereafter, the lifeless body of an adult male was discovered lying on the ground at Linkford Street with injures.

Paramedics were called to the scene and attempted to revive the man, but he was pronounced dead on the scene.

Meanwhile, police are appealing to members of the public, who may have information that can assist with the murders that occurred last week, to contact the Central Detective Unit at 502-9991/2, Crime stoppers at 328-TIPS (8477) or the nearest police station.