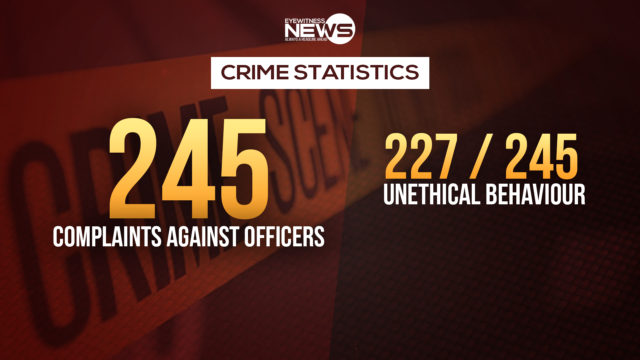 NASSAU, BAHAMAS – While Police Commissioner Anthony Ferguson did not state how many police officers were discharged from the Royal Bahamas Police Force in 2018, the commissioner acknowledged the increase in complaints against officers, including reported incidents of “conduct of a major nature”.

“There was a little, slight rise in disciplinary/reported matters,” Ferguson said in response to questions from Eyewitness News Online during the commissioner’s annual ‘Meet the Press’ at police headquarters.

“A lot of those are being dealt with and persons have been fired.

“Yes, persons have been fired. Where the evidence exists, persons who violate disciplinary code and it falls under the authority of the commissioner, and it requires a person to be dismissed, they were dismissed.”

There was a 24 per cent increase in complaints made by the public against police officers — from 197 matters in 2017 to 245 matters last year.

A closer look at the data shows, there were 14 reports of “conduct of a major nature”.

This represents a 26 per cent decrease over the 19 reported incidents reported in 2017.

There were 227 reports of unethical behavior, a 31 per cent increase over the 173 reported incidents in 2017.

Meanwhile, there were five reports of neglect of duty.

There were five reported incidents of neglect of duty in 2017.

Of these reported matters, police completed their probes into 68 of them, while 177 remain incomplete.

Yesterday, Ferguson said there is no special treatment for a  police officer when it comes to complaints against them.

“In the same like manner as… you would investigate a member of the public, you have to do the same thing and they are afforded all the rights and privileges.”

Last January, Attorney General Carl Bethel admitted there were deficiencies in the police force’s complaints and corruption branch due to a lack of independent oversight.

As he addressed the United Nations Human Rights Council’s Universal Periodic Review Working Group in Geneva, Switzerland, Bethel said the government was reviewing the branch as part of its reform agenda on anti-corruption.

It is unclear how many officers were discharged in 2017.

Last year, several officers were hauled before the courts.

In October, Antonio Cash, a prison officer who showed up at the Department of Corrections with 11 ounces of marijuana, was sentenced to three months in prison after he pleaded guilty to drug possession with intent to supply.

Prison officer Dennis Theophilus Watson, 21, was also charged in October with possession of dangerous drugs with intent to supply after four packages of suspected marijuana totalling nine and a half ounces was found in a vehicle he was in with another man.

He pled guilty in court and was ordered to pay $2,000 or spend one year in prison.

A police reservist was also charged in court with the alleged unlawful sexual intercourse of a teenager at the East Street South Police Station in July.