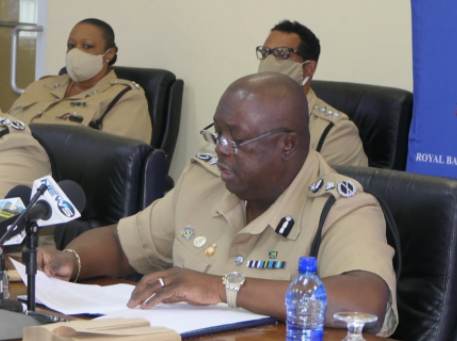 NASSAU, BAHAMAS — More than 100 police officers have been placed in quarantine due to exposure to COVID-19 since the country reopened its borders on July 1, according to Commissioner of Police Paul Rolle.

This comes as 10 officers on Bimini have been placed in quarantine after exposure to people who have tested positive for COVID-19.

Rolle confirmed ten replacement officers are being sent to the island from Grand Bahama.

To date, there have been 761 confirmed cases in The Bahamas.

When the country reopened last month, the number of cases stood at 104.

Rolle declined to comment on how many officers have tested positive for COVID-19 to date.

“We are frontline and first responders and that’s always going to be a concern for me,” Rolle told Eyewitness News.

“I’m trying to make sure the officers are able to work in a healthy environment. So in terms of ensuring all of the stations are properly sanitized, officers are equipped with their PPE’s and follow the social distancing protocol.

“We are trying to ensure that the work environment itself is safe as much as you can. There’s always an inherent danger in it, particularly after this last wave emerged.”

COP explained that while officers are being taken out of the system due to exposure, there is no critical shortage at this time.

“Several of the officers that were in quarantine last week returned to work and so that was about 70 thereabout in Freeport and another some here in Nassau, so they are back to work,” Rolle said.

He noted that the number of officers in and out of quarantine continues to change daily.

Asked when those officers who have been quarantined would have been exposed to the virus, Rolle said after the country’s borders reopened.

“It was a number of persons in Grand Bahama, that’s where the bulk of it started,” he said.

“And since then, as more persons around the country have been tested positive and they were interacting with members of the police force, once we determined that [they were exposed], then we placed those officers in quarantine.”

Rolle maintained however that the occurrences do not impact the policing of the RBPF.

“We ensure that officers have an adequate supply of PPEs in order to enforce the law and carry out there work, so that’s really not an issue,” he added.

“There’s always an inherent amount of concern in terms of contracting. You can take measures necessary as much as you can to protect, and that’s what we are doing to mitigate as much as possible the transmission, if in fact someone is positive.”

He said officers are out on the roads ensuring that people are complying with the government’s emergency orders.