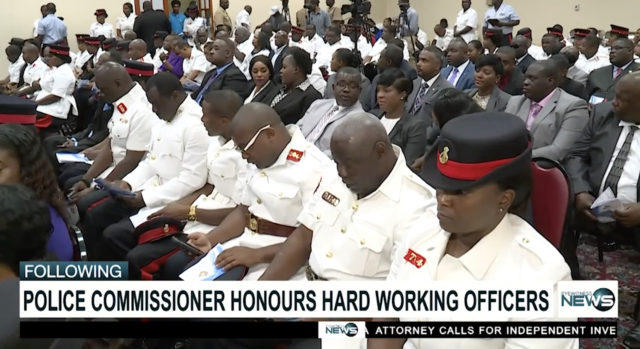 Police Commissioner Anthony Ferguson presented each of the awardees with certificates of honor for their hard work and years of service to the police force.

“I know how hard policing can sometimes be, especially when all of your dedication, physical efforts and time goes unnoticed or not appreciated,” the Commissioner said.

“So, this commendation ceremony is a clear indication that we appreciate the work that you have done for this organization, and by extension, the Commonwealth of The Bahamas.”

The duo shared with Eyewitness News Online that they felt elated to be recognized and awarded by the commissioner for their contributions to the police force.

“I feel really honored and it shows that our commissioner really cares about persons under his regime,” Brown said.

“I have 19 years of service and stay dedicated because I have passion for what I do. I am a fingerprint examiner, I have worked beyond the call of duty on numerous occasions and I do everything unto God and not for recognition; but I give thanks to God for what has happened today and thanks to my supervisors for recommending me for this commendation,” Butler shared.

Similar commendations will be distributed to officers stationed in the Family Island.