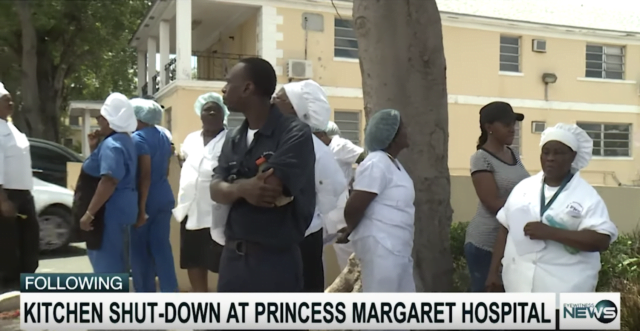 NASSAU, BAHAMAS – Tempers reached a boiling point for kitchen staff at Princess Margaret Hospital (PMH) on Thursday as dozens of its employees walked off the job shortly after 12noon, following a heated verbal back and forth between kitchen management and staff.

“Well it’s a remark made by one of our senior bosses when one of the staff said to her, ‘this kitchen is very hot,’ and her response in return was, ‘your house is hotter than this,’ so one of the staff members took this to heart and said, ‘if yall ain’t going to walk then I am going to walk,” he alleged.

Evans said it was at this point that more than half of the kitchen staff walked out.

Virginia Rolle, Head Cook at PMH, who has worked in the kitchen for 13 years, said the unbearable heat and unprofessional treatment by kitchen management has become the “norm.”

“Even this morning I said to the boss if it would be alright for us to wear t-shirts because these jackets that we are wearing are very hot. Her response to me was, ‘I’m weak right now,’which meant; that if she was weak and was working in the conditions then she expect us to do the same,” Rolle said.

“I mean I came here 34 years ago and when I came to work here in the kitchen I met the people sitting out on the lawn because of the heat,” she said.

Evans also pointed out that under staffing is another issue.

“We deal with patients, guests and the employees; that’s a lot on our plate having to do all that and deal with the heat,” he said.

“It’s inhumane working in these conditions under all this pressure.”

Kimsley Ferguson, President of the Bahamas Public Services Union said that the exhaust problems are an issue that the union has tried to address before.

“The union had intervened and the unit was repaired and from then to now it has been in and out,” Ferguson shared.

Ferguson put hospital management on notice that workers are out until their issues are addressed.

“These persons are going to be here until the situation is rectified and someone can give us a reasonable time frame as to when the matter is going to be resolved.”

There has been no response from PMH management up to press time.