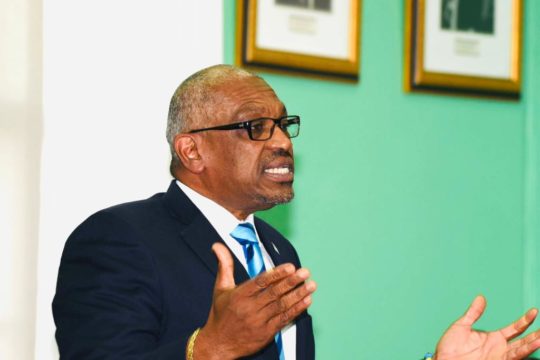 “Each Bahamian can be part of the battle by rejecting the spirit of negativity that has infected too much of our public conversation.,” he said.

“Do not join them. We have a battle to win. If individuals speak negativity, discourage them. Do not forward fake news.”

He continued, “And to the fake gurus out there, I only say to them, that as our suffering continue, so will theirs.

Minnis made the comments as he tabled a proclamation by the Governor General declaring a public state of emergency – which took immediate effect on March 17.

The proclamation gives the government powers to manage the local spread of the virus –  and the regulations mandate it is illegal to share, post or repost false information, reports or statements on any platform, including social media.

In Parliament, Minnis underscored there has been an ongoing problem in The Bahamas with the “creation and spread of malicious fake news”.

“Sadly, today, the malicious creation of misinformation for the purpose of creating harm, chaos, violence and disorder is deeply worrisome,” he said.

“The spread of malicious fake news has the potential to cause violence; runs on financial institutions and/or critical food and medical supplies.

“Such fake news may cause widespread panic that prevents citizens from following directions designed to protect their lives during a crisis.”

The Emergency Powers (COVID-19) Regulations, 2020, prohibits the publication, posting or re-posting on any media platform, including social media, of any purported news, report or statement that is known to be untrue, suspected to be untrue or “incites public fear, panic or ethnic hatred”.

Under the regulations, a person would be liable, upon conviction, to a $10,000 fine and/or a term of imprisonment of 18 months in prison.

After the prime minister wrapped up his contribution, House Speaker Halson Moultrie applauded the move insisting that the matter needs to be dealt with in a serious way.

Moultrie has continually called for Parliament to consider legislation to regulate social media.

“…Now this social media is a major difficulty for me because I am satisfied that it creates a culture of deceit, deception and dishonesty.”

Moultrie said: “This fake news culture that we seem to be adopting is something that needs to be dealt with in the most serious way, and I’m so pleased to discover that the government has taken the initiative to do such in particularly this time of crisis, when the nation is facing the real threat of death as a result of this coronavirus.”

Moultrie also admonished all Bahamians to live in the spirit of brotherhood.

The proclamation of emergency will be into force for 14 days, but can be extended up to six months upon parliamentary approval.

Always a headline ahead, around the world, Bahamas, coronavirus