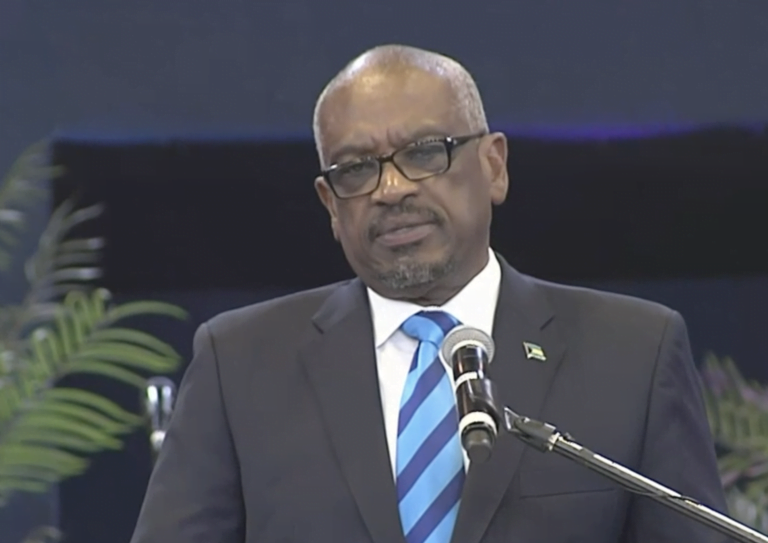 NASSAU, BAHAMAS- Prime Minister Dr. Hubert Minnis vowed to eradicate shantytowns and “return law to our country” during his first address to parliament since the passage of deadly Hurricane Dorian.

“We will eradicate shantytowns… I send a notice to illegals that they can leave voluntarily or they will be forced to leave,” Minnis said.

The prime minister told the Lower House he had heard “noise” concerning shantytown properties, and has directed the Attorney General to compulsory acquire the Mudd, Pigeon Peas, Sand Banks and other related areas.

He said the government will be monitoring Abaco and Grand Bahama with helicopters to prevent an influx of “illegals” and the development of shantytowns.

Just under 1,600 storm evacuees are being housed in nine shelters across New Providence, with a significant portion of them evacuated from flattened shantytowns in Abaco.

Two of the country’s largest shantytowns – The Mudd and The Peas were completely destroyed.

Minnis also announced tax benefits and incentives granted to East Grand Bahama and Abaco for three years for hurricane recovery, will now be extended to the entire island of Grand Bahama for one year.

“Many Bahamians on Abaco and GB remain devastated and traumatized,” Minnis said.

“There is still a vast amount of work to do to help those struggling to recover and build their lives. Their needs are our overwhelming priority.”

The House returned from its summer recess today, with ministers tabling a litany of bills, regulations, and financial reports.

The Official Opposition’s request for a full and frank House discussion on the government’s management of Hurricane Dorian was defeated after it did not garner the ten votes needed to establish a quorum.

The request was made pursuant to rule 51, which would allow the debate to take precedence over scheduled government business.

However, House Speaker Halson Moultrie said he did not feel the allotted 90 minutes were sufficient to fully ventilate critical issues outlined in the Opposition’s letter.

Moultrie read the entire rule ahead of his decision, and then put the matter to a vote.

Members were asked to stand to indicate support for a debate; however, only the four Opposition MPs rose to their feet.

Moultrie opted to table the document in a bid to “strengthen and deepen democracy”, but not before striking out some seven paragraphs he felt were “opinionated and not necessary”.

Opposition Leader Philip Davis rose to his feet to challenge the decision; however, Moultrie noted under the related rules the position of chair should not be debated or challenged.

Davis’ comments were expunged from the record.

As he addressed the Lower House, Minnis noted the Disaster Preparedness and Relief bill tabled today will allow each member to debate Hurricane Dorian when it is debated next Wednesday.

“That will allow each and every member to debate Hurricane Dorian for at least 30 minutes as opposed to just a handful for ten minutes,” Minnis said.

Minnis also addressed criticisms over the timeliness of storm response, telling the Lower House the deadly Category 5 storm “figuratively fell asleep” on Grand Bahama as its feeder bands continued to lash the Abacos.

He said the US Coast Guard immediately dispatched its choppers to Abaco saving lives once the all-clear was given from Hurricane Dorian.

“There are many who have said that the Bahamas or agencies working along with the Bahamas have not responded in timely fashion,” Minnis said.

“The US Coast Guard in advance had parked supplies and helicopters in Andros and Exuma waiting for clearance to travel to Abaco and do what was necessary.

“As soon as all clear was given choppers dispatched immediately to Abaco where lives would have been saved.”

Minnis said he and several cabinet ministers will return to Abaco to meet with victims this afternoon and remain overnight.

“I will be there to once again thank those on the ground working day and night to assist with recovery and reconstruction,” he said.

Minnis said he will travel to East Grand Bahama on the weekend.

He thanked public officers and uniformed branches, volunteers and scores of people and “residents of good will” who have helped victims on Abaco and Grand Bahama. Noting displays of solidarity abroad, Minnis asked those at home to demonstrate the same.

The prime minister said the generosity and kindness displayed during this crisis “help to heal others and provide hope to those broken in spirit”.