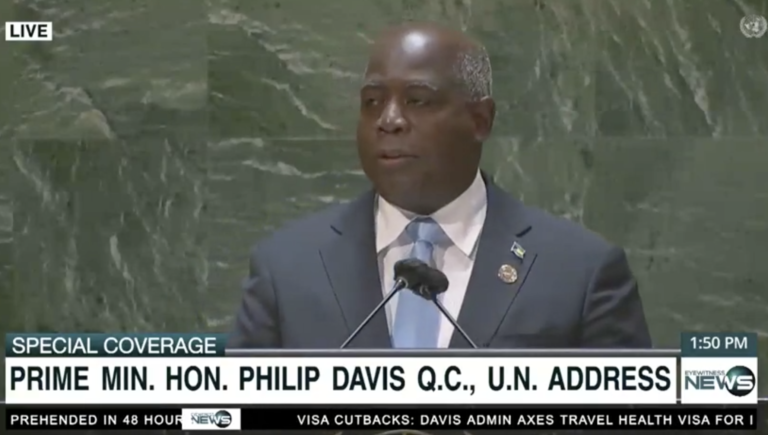 NEW YORK, NEW YORK — Prime Minister Philip Davis called on world leaders to ensure the equitable distribution of vaccines as he underscored the need for global cooperation to face modern crises at the 76th Session of the United Nations General Assembly today.

In his first international speech just ten days after taking office, Davis underscored the need for equitable and fair access to development financing, and the dire need to mitigate the effects of climate change.

Speaking to the COVID-19 crisis, Davis said: “In every country, we have lost loved ones. We have seen our healthcare workers battle bravely. We have contended with disruption, uncertainty, and grief.

“We have benefited from extraordinary cooperation and achievements in science, but we also had to contend with misinformation and disinformation, and insufficient attempts to curb bad actors propagating the same. Bad information has flowed across borders, undermining public health and public trust.”

Davis noted the timing of the pandemic has been particularly difficult for the country with an extraordinary need for new resources in health and education and housing juxtaposed against a dramatically contracting economy.

“Our interconnected world means that we will only be safe when all countries, including mine, have the tools needed to fight this virus,” the prime minister said.

“This requires the equitable distribution of vaccines. That includes distribution to Small Island Developing States, who are not manufacturers. Stockpiling for self-preservation is a fallacy.

“You will only be safe when we are all safe!”

He said the country supported renewed calls to fully fund the ‘Access to COVID-19 Tools Accelerator’ and its COVAX facility.

Davis furthered the country had already suffered a catastrophic shock to its economy and livelihood ahead of COVID-19 — Hurricane Dorian.

He noted the recent Intergovernmental Panel on Climate Change (IPCC) report which warned that avoiding the worst outcomes of climate change requires immediate action, and called for greater climate financing and more engagement.

Davis also committed his intention to take up the charge at the 26th Climate Change Conference.

He said the nation will lead on wetland and ocean preservation, and seek re-election to the International Maritime Organization.

“Our countries disproportionately bear the burden of the “Recovery Trap”, in which we attempt to rebuild to the tune of billions – billions we never had, even before COVID,” he said.

“We cannot set goals we have no intention of meeting. We cannot keep postponing the change we need for countries like mine to survive.”

He also maintained The Bahamas’ rejection of the ongoing economic blockade of Cuba.

We never mention that some of the bad information on Covid 19 has come from those in authority. It’s going to be a tough time until we can get a better uptake of the vaccines.

The talk here is good, and maybe so it seems genuine, but in due course we will see “how it goes”, I won’t go so far to say we are chartering into the unknown, but as mentioned “ we will see”- the honeymoon as they say is over.

Our Prime Minister address to the UN was sobering and pragmatic. He recognizes that the task ahead is not an easy one as the course is unchartered. Also, he has demonstrated that he and his new government cannot bury its head in the sand like an ostrich. It is incumbent that he as leader be cognizant of the ever evolving variants and attributes of this Covid 19 and embrace the assistance of all of us to battle this scourge. It has to be all of our objective to the eradication of this menace. He is called Brave and that he must be. We as a people must ensure that he is successful as our lives depend on his success. The campaign is over and it is time that we become One Bahamas moreso than ever before. We must give our unwavering support to beat this enemy that has no respect for human beings wherever they are in this world. WE MUST WIN!