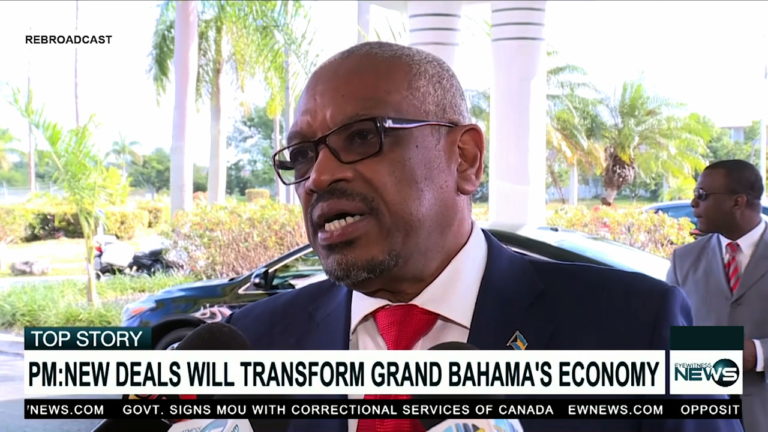 FREEPORT, GRAND BAHAMA –  While concerns still  linger over the proposed Oban project – a multibillion-dollar oil refinery and storage facility pegged for East Grand Bahama – Prime Minister Dr. Hubert Minnis told reporters on Tuesday that he was not in Grand Bahama to discuss ‘nonsense’ when asked about the Oban deal and whether or not it could co-exist with another project.

“Listen man, you hear me just open a project last night that I know is going to work. You hear I am going to Cabinet today to discuss another project that I know will work, so I ain’t talking nonsense today,” the prime minister said, then quickly advised a reporter from another media house not to “twist” his words.

“Oban is not on the radar this morning. We are dealing with other issues this morning,” the prime minister said before heading a cabinet meeting held in the nation’s second city.

At the time, the prime minister was being questioned about the Oban deal and whether or not it would be able to co-exist with the plans of Carnival Cruise Lines, who are proposing to build a grand port in East Grand Bahama.

On Monday, the nation’s chief and other cabinet ministers arrived in Freeport to attend an information meeting to listen to Carnival’s proposed plans.

It was the Minnis-led administration that signed a controversial heads of agreement with Oban Energies on February 10, 2018, to develop a multibillion-dollar oil refinery and storage facility in East Grand Bahama.

When the government signed the initial agreement on February 10, the public was not notified at the time. However, it later held a “ceremonial signing” on February 19 with then Oban Energies Non-Executive Chairman Peter Krieger.

The agreement stated that the government must work with Oban to address any concerns raised in the environmental study.

While the document has yet to be made public, Oban Energies Managing Director of Operations Alexander Grikitis confirmed in December that the company completed the EIA.

The government has also appointed a lead negotiation team to strike a new deal with Oban Energies and on Tuesday,  in Grand Bahama, Minister of Labour Dion Foulkes, who chairs a Cabinet sub-committee and technical advisory group charged with examining the deal, told the media that the government is in talks with the new president and chairman of the Oban board.

The talks, he said, will determine a fixture date to begin the renegotiation of a new heads of agreement.

“We have not settled on that date as yet,” Foulkes told reporters.

“I am totally 100 per cent opposed to any oil refinery or any additional oil storage areas being built and operated on the east side of Grand Bahama,” Darville said.

“That would be an undeniable conflict with what Carnival is doing…a cruise port… because the people would not be able to tolerate the filth and the stench that comes from an oil refinery.

Attorney Fred Smith was also in Grand Bahama on Tuesday and expressed that when it came to Carnival’s proposed “grand port” there were environmental and economic concerns expressed.

“There were issues with the marine environment and whether or not it was a suitable physical location for those large size ships,” Smith said.  But despite this, Smith believes that Grand Bahama will once again lead the way as the touristic mecca of The Bahamas, once the grand port is constructed.

“This is going to be a part of the resurrection of Freeport and Grand Bahama for the future of The Bahamas,” Smith said.

Meanwhile, the proposed Grand Port is expected to be completed in late 2021, and during the construction phase will employ some 1,000 people, according to the prime minister.

The prime minister said he believes the government has found the right formula with a new cruise port development to rejuvenate Grand Bahama’s ailing economy.

He said the Grand Port project will also give Bahamians the opportunity for ownership in the tourism and cruise industry.