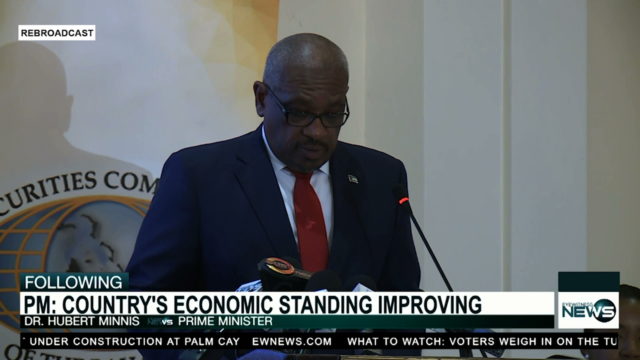 Prime Minister Dr. Hubert Minnis said the Bahamian economy is turning around economically. He also touted that job creation, strengthening the economy and improving the environment for businesses are top priorities of his administration.

The prime minister’s comments came while officially opening the Securities Commission of The Bahamas Public Companies Forum at the British Colonial Hilton on Thursday.

The one-day dialogue was held under the theme, “Expanding the Role of the Capital Markets In Bahamian Economic Development,”.

According to the prime minister, there are positive indications that the country is turning the corner economically.

“The IMF recently projected real gross domestic product growth of 2.3 per cent for 2018 and 2.1 per cent for 2019,” he said, adding that even though these projections are encouraging, there is still an immense amount of ground to make up, particularly following what he described as, “economic decline” following the great recession of 2008.

The prime minister said that while the government’s role is pivotal in the economic growth of the country, the duty cannot rely solely on the government.

“Viable, sustainable private businesses must truly be the drivers of the Bahamian economy. The government’s duty is to create an environment that invites businesses and entrepreneurs,” he said.

In an effort to ensure that this happens, Minnis said that the government is fully committed to improving the ease of doing business in The Bahamas.

“The government’s ease of doing business committee has proposed a suite of recommendations across the metrics to introduce real reform in the regulatory environment. We have made some progress today but we need to make even greater progress in a timelier manner,” he said.

The prime minister stated that businesses can expect to start experiencing even greater progress as the government starts to adopt key measures in the new year. He also said that while there is a considerable amount of work to be done, they are optimistic that the country is turning the corner.

“We look forward to more growth. The government and regulatory boys like the commission are at work to create the environment for business to flourish,” he said.

“We are rejuvenating tourism, forging new paths and new narratives about our financial services industry, creating a new home for our financial technology and improving entrepreneur access to expertise skills.

“Together with you the professionals and practitioners, entrepreneurs, investors, wealth managers and regulators we can shape a new environment for the 21st century Bahamas to develop and flourish.”