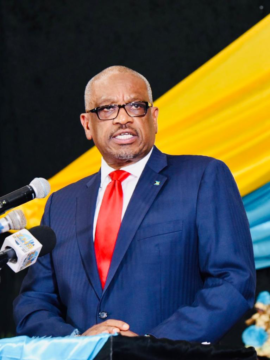 NASSAU, BAHAMAS – Prime Minister Dr. Hubert Minnis yesterday warned that saboteurs of government property and equipment will be punished to the “greatest extent of the law”.

He was referencing claims made by Water and Sewerage Corporation (WSC) Executive Chairman Adrian Gibson that the mass interruption of water supply across New Providence last Tuesday was a “malicious act of sabotage.”

The water supply was cut off around 11 p.m., just hours after the Bahamas Utilities Services and Allied Workers Union demonstrated over the suspension of two union members and instructed its members to withdraw their “enthusiasm”.

The union has denied the allegations of interfering with the corporation’s equipment.

Both sides met at the corporation yesterday after Gibson agreed to review the suspensions, though the outcome of those meetings remained unclear last night.

Addressing the media on the sidelines of a ceremony at the Melia Nassau Beach Resort, Minnis said, “My minister of labour; they are having a meeting this morning so they can resolve these issues.

“However, my position is firm.

“The government will not allow [anyone] to sabotage, if it is done, any entity; to sabotage any of government’s equipment, so as to decrease the quality of life for its citizens.

“Once we’re cognizant of any event by anyone then we will deal with it by the greatest extent of the law.”

Last week, BUSAWU President Dwayne Woods called on Gibson and General Manager Elwood Donaldson to be removed, citing concerns from the suspensions to the process of promotions at the corporation.

The union has filed three trade disputes in recent months.