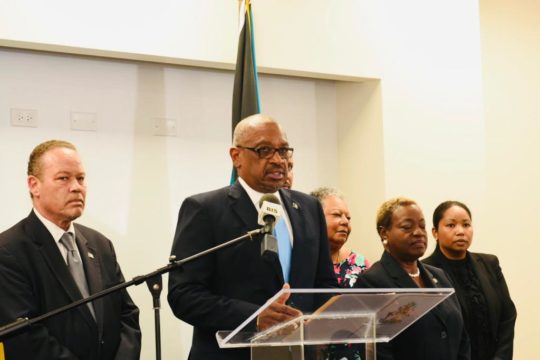 Prime Minister Dr Hubert Minnis announced that in the event of staffing shortage, the police force and defence force can call upon all retired and available officers.

NASSAU, BAHAMAS — As he announced the activation of a nationwide partial lockdown and mandatory nightly curfew, Prime Minister Dr Hubert Minnis announced that in the event of staffing shortage, the police force and defence force can call upon all retired and available officers, including those on vacation, to immediately report for duty.

“I can assure you that they are ready and have commenced mobilizing their teams,” Minnis said at a press conference at the Office of the Prime Minister.

“The police and defence force have been advised that should they find themselves in a staff situation, they are authorized to; all those individuals who are on vacation, who have been retired and can perform their duties; they can immediately report for duties as this is an urgent situation.”

The curfew will be in effect each night from 9pm to 5am, with exceptions to be approved by the commissioner of police.

The order takes effect at 9am Friday, and will remain in effect until 9am on March 31.

The prime minister said the order will be lifted upon consultation with health officials.

Additionally, the prime minister announced nurses who have completed their training and successfully completed their examinations will be appointed effectively immediately to boost frontline staff to address the COVID-19 threat.

In an internal memo to staff obtained by Eyewitness News, Immigration Director Clarence Russell said immigration officers will work their normal duties and all shifts shall continue in spite of the existing curfew.

“While the department might not be referred to as an essential service, the duties we perform are certainly essential duties, in the interest of preserving the peace and tranquility of this the Commonwealth of our Bahamas,” the memo read.

Russell advised immigration officers to wear their uniform and carry identification when carrying out their duties at night in the event they are stopped during the curfew period.

He encouraged officers to perform their duties with “pride, distinction and honour as responsible, quality public servants”.

There have been three confirmed cases of COVID-19 in The Bahamas.

The governor general declared a public state of emergency Tuesday.