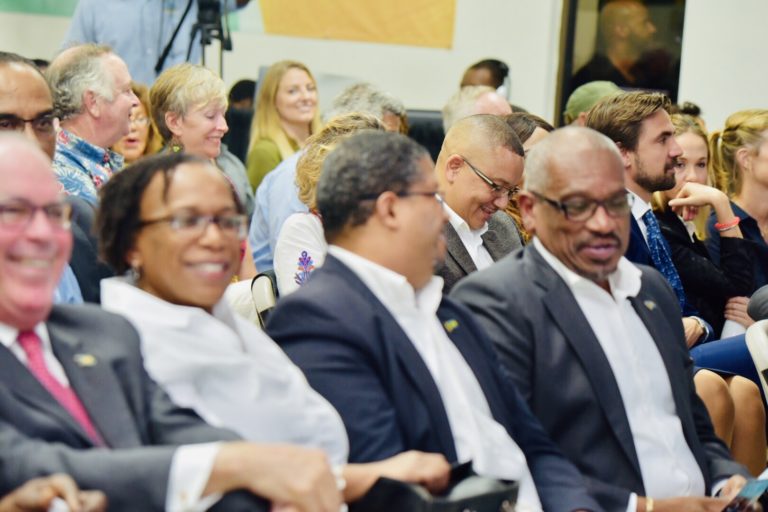 The Prime Minister remarked that his government is very enthusiastic about the project.  And, he called on Grand Bahamians to prepare themselves for the potential economic benefits from additional cruise passengers and business ventures.

“I am so happy to be here to celebrate with you as we embark upon this road to progress.  Let us continue to work with a spirit of collaboration in the ongoing revival and renewal of Grand Bahama.”

Also in attendance at the meeting were members of his Cabinet, other government officials from Nassau and key stakeholders of the Grand Bahama Port Authority and Carnival Cruise Lines.

This Cruise Port, which will be the largest Carnival Cruise Port in the world, seeks to make Grand Bahama and The Bahamas one of the best cruise destinations in the Caribbean.

The project will include local ownership of restaurants, retail outlets, new excursions among other entities and business ventures, triggering economic growth for the island and more than 1,000 direct and indirect jobs within the coming years.

“This ambitious port project represents one of the more significant opportunities for Grand Bahama in decades,” the Prime Minister said. “What is being proposed will prove to be a significant catalyst for economic growth in Grand Bahama.”

Stating the need to diversify with new industries as well as Tourism, the Prime Minister said the Bahamas archipelago offers a wide diversity of tourism services and products.  He pointed out that such services and products are cruising, boating, heritage tourism, ecotourism, resorts, boutique hotels, and a range of experiences for visitors that are uniquely Bahamian in character.

According to the Prime Minister, the proposed port will see a “new spirit and revival of hope” for Grand Bahama.

“The development of the new Carnival cruise port is a part of this new spirit and will play a leading role in the revival of hope and opportunity,” he said.

The Prime Minister added that there would be significant opportunities for business development and entrepreneurship by Bahamians.   The new port will result in greater Bahamian ownership in terms of a range of business opportunities.

“There is a compelling and essential premise that is at the heart of the government’s ambitious vision and program for Grand Bahama,” he said.  Also on tap for the island’s revival is the Bahama Bay resort and residential development, the former Ginn Sur Mer.

“We are on track to sell the Grand Lucayan, the temporary purchase of which was absolutely necessary for the economy of Grand Bahama.

“We are also determined to transform Grand Bahama into a technology hub,” the Prime Minister said.

He said he is also advised that the cruise port project promises to be one of the most technologically advanced cruise ports in the region, with a state of the art point of sale cashless system.  “We expect opportunities for Bahamian software designers, computer programmers to help fulfill our Tech Hub goal,” the Prime Minister said.

He pledged that the new project would adhere to strict environmental guidelines.

Also, the new Small Business Development Centre will play an important role in business development and empowerment for Grand Bahama in general and in helping Grand Bahamians to realize economic opportunities in relation to the new cruise port, the Prime Minister said.

This story was contributed by Lindsay Thompson – Bahamas Information Services