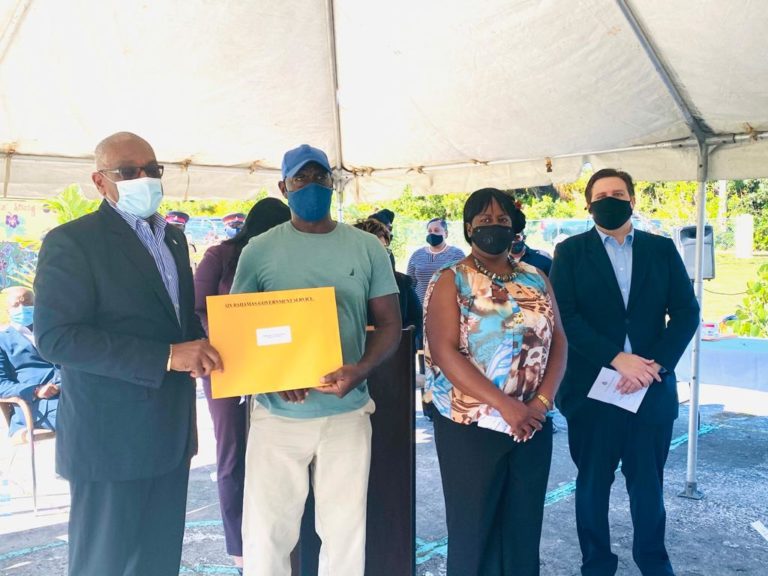 CROSSING ROCKS, ABACO — Twenty-four Crown Land grants were presented to residents of Crossing Rocks yesterday as part of the government’s pledge to ensure that displaced residents of this community destroyed by Hurricane Floyd in 1999 received title deeds to their properties in order to rebuild.

The pledge was made to residents in 2018 following Prime Minister Dr Hubert Minnis’ visit to the community, where 120 properties had been destroyed by the storm.

Friday’s presentation brings the total number of title deeds and grants awarded to Crossing Rocks residents since 2019, to 80.

“This figure represents more than 60 percent of the properties in Crossing Rocks which were destroyed by the 1999 storm,” said Minnis.

“For those of you who are patiently waiting to receive papers to your property, I encourage you to remain steadfast.

“I am advised that additional grants are being prepared and they, too, will be awarded to residents of Crossing Rocks.”

The prime minister said the presentation ceremony was a demonstration of the government fulfilling its commitment to grant government-owned land to Bahamians, including Crown Land and land held by other government agencies.

Minnis also noted the two 60-acre parcels transferred to the Disaster Reconstruction Authority to provide homes for approximately 400 residents in Wilson City and Marsh Harbour, and 49 lots for the construction of homes in Central Pines.

He said the government is also identifying additional land on Abaco, particularly in the Treasure Cay area, and Andros and Eleuthera, with other islands to follow.

“My government has been committed to this initiative of providing land grants to Bahamians, particularly within the Family Islands,” said the Prime Minister.

Another strategy under the Government’s Land Reform priority is the implementation of the policy of Ready-to-Build Serviced Lots.

Under this initiative, Bahamians have greater access to land and, by extension, affordable homes, Minnis said.

The Access to Affordable Homes Act of 2018 enables serviced-lots owners to benefit from custom duty concessions on all necessary building materials for the construction of their home, upon application to the Ministry of Finance.

Minnis noted that for the people of Abaco and Grand Bahama still rebuilding their lives after the catastrophic Hurricane Dorian, the government has extended a number of tax concessions to aid in the rebuilding process, until June 2021.

“I want to assure you that much work is being done to secure a better future for all Bahamians,” he added.