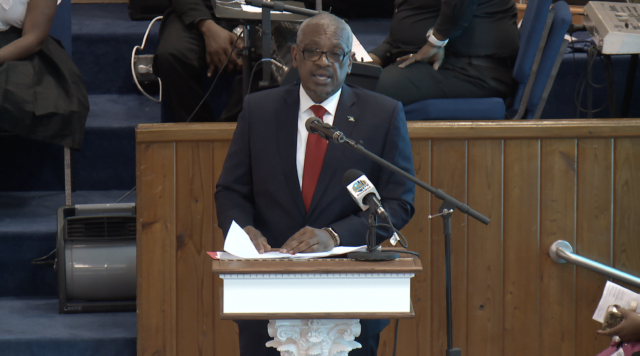 Says  PLP ruled ‘under a cult of personality, a sense of entitlement, mass corruption and widespread victimization’

NASSAU, BAHAMAS –  Prime Minister Dr. Hubert Minnis expressed on Sunday that for the first time in decades, the restoration and revitalization of Grand Bahama is on the way, even though the former Progressive Liberal Party (PLP) government was prepared to see the island and its people sink deeper into distress and depression.

“Though it was unpopular in some quarters, we made the right decision to rescue Grand Bahama and to save the jobs at Grand Lucayan and, by extension, at Port Lucaya.

“The PLP opposed what we did,” the prime minister said.

“They were prepared to see Grand Bahama sink even deeper into distress and depression. Grand Bahama will not soon forget the utter neglect by the PLP while they were in government and their contempt for Grand Bahama while they are in Opposition.”

The nation’s chief was speaking Sunday at the Free National Movement’s church service to commemorate its second anniversary in office at the Cousin McPhee AME Church on Carmichael Road.

The FNM captured the government on May 10, 2017 in a landslide victory, securing  35 of the 40 seats in parliament.

Minnis said since coming to office, the government has put a stop to: rampant corruption, waste and stealing of the people’s money, the country’s descent into economic collapse and the never-ending downgrades to the economy.

“Our economy is getting stronger and healthier, but we still have work to do for more Bahamians to feel the recovery in their pockets and in their bank accounts,” the prime minister said.

The prime minister also noted that for a quarter of a century, ‘the PLP ruled under a cult of personality, a sense of entitlement, mass corruption and widespread victimization’.

He said the former administration also kept rigid control of the broadcast media so they could spew their propaganda and limit freedom of expression.

“Then, and now, they believe that that the rule of law does not apply to them” the prime minister said.

“They believe they can engage in corruption without consequences.

“They turn a blind eye to the reports of the Auditor General.

“They demonize the Royal Bahamas Police Force when it serves their interests.

“The PLP believes it owns this country and they are entitled to steal and plunder with zeal.

“[As for] the FNM, we are different,” said Minnis, his comments followed by a loud round of applause.

Meanwhile, the prime minister told congregants that the more than 600 persons who attended last week’s Free National Movement town hall meeting was a demonstration of persons who wanted to ensure, in 2017, that the country was removed from one of the ‘worst’ governments in an independent Bahamas.

He noted, however, that the FNM could never take this support for granted.

The prime minister said the party bears and cherishes the name ‘Free’ because they are committed to the cause of expanding and protecting freedom in the nation.

“We are guided by the values of equality, the rule of law, social justice and opportunity for all,” he said.

“This is the content of the FNM’s character in office. Because of our 25 years of struggle to save our democracy, we view government as a privilege, as a sacred trust, not as an entitlement.”