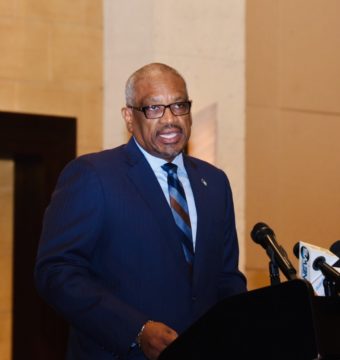 The announcement came during a pre-birthday celebration hosted at the school in Gambier Village.

The prime minister has made it a yearly tradition to celebrate his birthday with the students at Gambier Primary.

While his birthday falls on April 16th, he chose to celebrate with the students on Friday because the school will be closed for Easter holiday this week.

He decided to flip the script ahead of his birthday and announced that he would be the giver of a special gift this year, and for the foreseeable future, to the school’s top performer as they transition into high school.

“I want to make a pledge to Gambier that every year, in honour of my sister, I will donate $1,000 dollars to the most outstanding student to assist them with whatever they need in pursuing their educational trek to high school,” he announced.

Dr. Minnis’ late sister was an educator by profession.

While revealing his new pledge to the student body, Dr. Minnis also gave a few words of encouragement.

“Once you are committed and think positively, whatever you want to achieve and accomplish; it is not impossible. You can do it,” he exclaimed.

“Do not listen to the noise and negativity; remain focused.”

After his brief speech the prime minister and his wife, Patricia Minnis, participated in story time with the students.

That activity was followed by a tree planting ceremony where the prime minister planted a lignum vitae tree on the lower school grounds.

After wrapping up his pre-birthday celebration with the students, the prime minister officially opened the recently renovated Gambier Park.