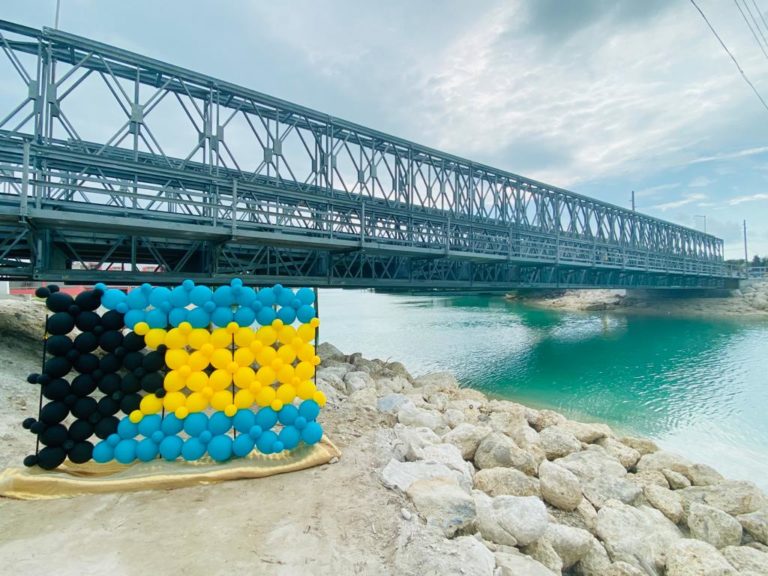 Balloons in the shape of the Bahamian flag are seen beside the new Roderick Newtwon Higgs Bridge connecting Spanish Wells and Russell Island during a reopening ceremony on Friday, January 8, 2021. (BIS PHOTO/YONTALAY BOWE)

The bridge had collapsed last May, cutting off access to the islands and cutting off the community’s access to its main water supply.

At that time, officials noted the government had signed a contract to replace the bridge in July 2019.

On Friday, at the opening ceremony for the new bridge, Minnis acknowledged the delay in replacement, stating: “There have been delays to the project as the contractor was severely affected from Hurricane Dorian with the company losing the majority of their equipment.

“Also, the restrictions imposed due to COVID-19 affected the time period for completion. Further, during the construction phase, the existing bridge collapsed when a heavily loaded cement truck passed over the structure.

“Thankfully, the contractor has worked tirelessly to overcome these challenges and accelerated the construction phase over the last few months. The new abutments were completed in less than a month.”

He added: “The time for assembly and installation was only two weeks. Despite a number of challenges with this project, it was with considerable satisfaction that the new bridge was opened to traffic in December 2020.

“I am so happy that today, we can declare the new Roderick Newton Higgs Bridge officially open.”

According to Minnis, the contract was awarded to Waugh Construction (Bahamas) Limited in the amount of just over $2.8 million.

This opening marks the latest in a series of Family Island visits the prime minister has personally made for various ceremonies, including Crown land grants, infrastructure projects and other “assessments”.