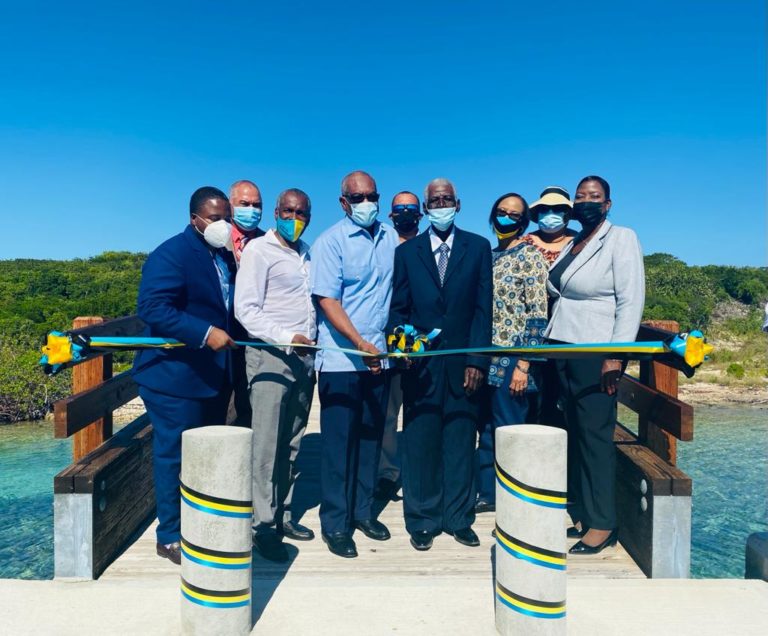 “It is a pleasure to be with you today to officially declare open two infrastructure projects for Long Island,” the prime minister said at the opening event. “These projects are part of our vision and plans for the ongoing development of the Bahamas gem and treasure that is Long Island.”

According to Minnis, the original Newton Cay Bridge, built in 1980, required replacement after partially collapsing due to damage from “the storm force effects of various hurricanes and harsh marine conditions”.

The contract for the replacement of Newton Cay Bridge was awarded to Stefan Knowles of SJK Engineering & Construction Limited in August 2019 in the amount of $407,263.36 including value-added tax (VAT), and the project was completed in February 2020, Minnis noted.

The prime minister added that the replacement bridge has more than twice the span of the original bridge, at 60 feet.

The second infrastructure project the prime minister opened was Monument Road, which “serves as an access to the popular Columbus Monument landmark” and “provides access to the government’s navigational beacon/light house adjacent to the monument”.

Minnis said the new road is “part of the government’s efforts to promote heritage tourism” in addition to having had been a request of many Long Islanders as the old road was “a narrow track road in very poor condition”.

“After numerous requests from local residents and government officials for the improvement of this road, it made it to the list of priority projects for the government as stated in the Minister’s Budget Debate 2018/2019,” he said.

He noted that the contract for the improvement of Monument Road was awarded to Bernard Knowles of Rowdy Boys Construction in August 2018 in the amount of $1,174,357.18 including VAT.

The project included: construction of approximately two miles of a pea rock and sand seal asphalt road 24 feet wide to the monument site; a six-foot-wide concrete walkway and steps; and amenities such as a car park, benches and soft landscaping.

As he declared the bridge and road officially open today, Minnis spoke to the government’s need to “ensure that every major island in our archipelago has the infrastructure and amenities needed to improve” the quality of life for Family Islanders.

He also thanked Gibson in particular for doing what he called “an outstanding job in getting critical waterworks developed throughout the Family Islands”.

“Adrian has delivered on a number of important projects for Long Island,” said Minnis.

“He is very dedicated to you. And I assure you, there is much more to come in the months and years ahead. We are dedicated to the ongoing development of Long Island, including vital economic and investment projects to help in the development of your economy, especially after the setbacks caused by the pandemic.”