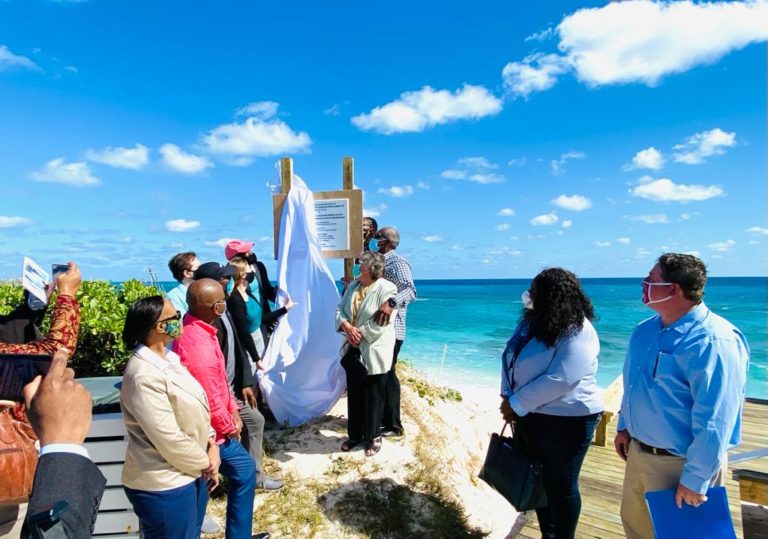 According to the prime minister, Hurricane Floyd in 1999 caused severe damage to the edge of Queen’s Highway and nearby sand dune on Elbow Cay, resulting in the loss of beach sand in front of the dune.

He said various attempts were made to re-construct the dune but in 2011, the dune was again severely damaged by Hurricane Irene, and a subsequent tropical storm.

“These series of events accelerated the shoreline erosion, which ultimately damaged the seaside edge of the road, leading to a sharp and dangerous drop off,” Minnis said.

“In some sections, traffic was reduced to one lane of road width. Immediate action needed to be taken to keep the road in a safe condition for motorists and pedestrians, and to stabilize the shoreline to mitigate further shoreline erosion.”

The Ministry of Public Works developed a design to repair the road and stabilize the existing dune and shoreline.

A contract for $3 million for the work was signed in August 2019 with Bahamas Marine Construction, but Hurricane Dorian and the COVID-19 pandemic delayed the project.

The scope of work included the rehabilitation of 790 feet of roadway, the construction of 850 feet of concrete retaining wall with steel railing and backfilling and planting of dune vegetation.

Minnis said: “From tragedy to adversity, the project pressed on and works were substantially completed in August 2020.”

He added: “While there is still much work to do here on Hope Town and throughout Abaco and Grand Bahama, we are making progress together.”

This marks the latest in a series of Family Island trips the prime minister has taken in recent months for various infrastructure projects or official ceremonies.