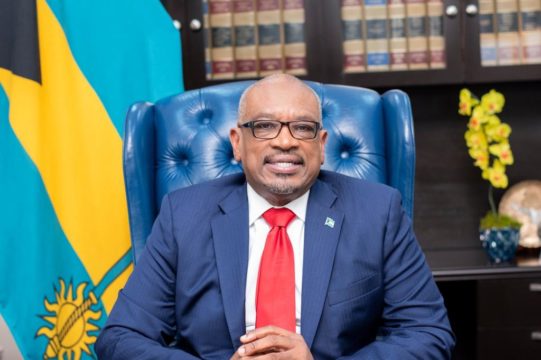 Sands’ resignation comes after a shocking revelation last week that six American permanent residents were allowed to disembark a plane along with a donation of COVID-19 test swabs amidst the country’s border closure.

In a short statement on the matter late last night, Minnis thanked Sands for for his service to The Bahamas, including during the COVID-19 pandemic.

The prime minister has not had a clearly defined portfolio and serves as a minister of ministers.

At the time of the government’s swearing in, he said he made the decision in order to perform his primary constitutional duty as prime minister, that being the coordination and oversight of the Cabinet.

Upon coming into office, the prime minister said he would hold his Cabinet to the highest standard of ethical conduct in the performance of its students.

Minnis sent a strong warning to his ministers that should they engage in unsavory or unethical behaviour, they would immediately be fired.

During a national address on Sunday, Minnis characterised the entry of the Americans as a breach of protocol. He however has not addressed the matter directly.

Sands tendered his resignation letter earlier yesterday, noting that his continued presence on the Cabinet may serve as a “distraction” from the government’s effort to manage the spread of the virus in the country.

“My actions were guided by my great desire to obtain the much-needed testing swabs which are in short supply both here and internationally and which are key to our efforts to trace the spread of the coronavirus so as to better focus our responses,” he said.

“I acted at all times in good faith.

“Nevertheless, I acknowledge that my actions have caused embarrassment for which I express sincere regret.”

The Tribune revealed in an article yesterday that Aviation Minister Dionisio D’Aguilar approved the arrival of the aircraft that brought the supplies and its passengers to the country.

Additionally, the residents were allowed into the country without being tested for the virus until a day after their arrival. They all reportedly tested negative.

The unfolding revelations comes as hundreds of Bahamians abroad are also trying to return home amidst the global pandemic.

The country remains on a nationwide shutdown with the borders closed to all incoming passengers.

Always a headline ahead, around the world, Bahamas, ewnews, parliament, Prime Minister

Lol, this is no surprise these comedians, I mean politicians are so predictable. Reading this article I’m only left to conclude that the minister of aviation should also be required to call on his sword as well. That is of course if the minister of ministers is truthfully sincere about employing a cabinet with such high ethical and moral standards. Otherwise, it’s a continuance of traditional unsavory politics by unsavory political characters.