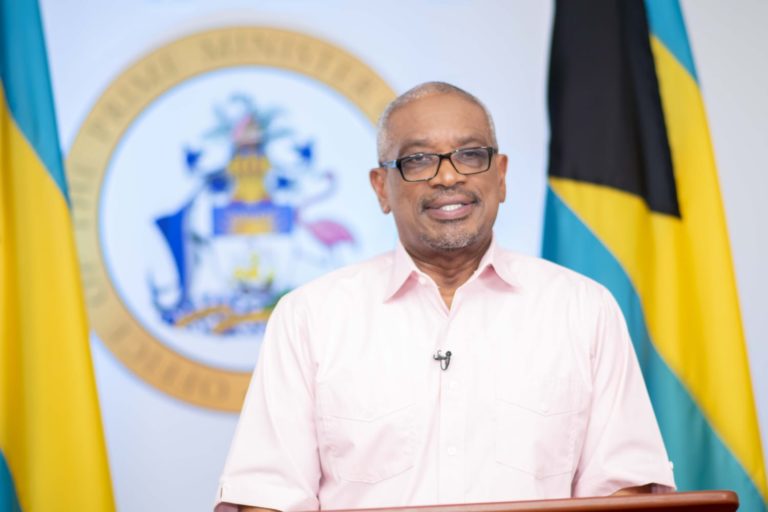 NASSAU, BAHAMAS — Prime Minister Dr Hubert Minnis said yesterday that the lockdowns and curfews implemented by the government have been effective in curbing the spread of the coronavirus in New Providence.

The prime minister advised that a metric system will be implemented to guide the operation of industries and the phased opening of islands that remain restricted.

Minnis was touring Bahamas Agricultural and Industrial Corporation on Old Trail Road when asked about the concerns of jitney drivers, who for several days have been speaking against the government’s latest emergency orders.

“We are putting together a phased opening, that’s being done not only by us, but we have a National COVID Committee which is comprised of elements of the private sector, chamber of commerce, etc,” the prime minister said.

“We are asking them to look at metrics.

“Therefore the bus drivers and everybody can just look at the phase, at the metric, and they know exactly what is being advanced.”

In April, during the first wave of COVID-19 cases, the prime minister announced a measured approach to re-opening the economy in five phases. The timing of the phased re-opening was similarly predicated upon metrics and guidelines by health officials.

Minnis noted that according to the analysis on the government’s mitigation efforts, the lockdowns have been effective.

He pointed to the current 10pm to 5am curfew in which he once again insisted that this is the most active time for social gatherings in The Bahamas.

“So when you take your country into consideration,  because that’s our most socialization period, it’s essential to minimize socialization at those hours and therefore we do quite well.”

The prime minister insisted yesterday however that the government can only do so much to help stop the spread of the virus in the country.

“We can only take you to a particular level,” he said.

“So we all have to do it together. It’s not the government, it’s us, we.

As of yesterday, the number of cases in the country stood at 2,057.

Of the cases 1,255 are in New Providence, 543 are in Grand Bahama, 67 are in Abaco, 53 are in Bimini, 19 are in Exuma, 15 are in the Berry Islands, eight are in Cat, eight are in Inagua, five are in Eleuthera, four are in Acklins, two are in Crooked Island, and one confirmed case in Andros. An additional 77 confirmed cases have locations pending.

Please tell me exactly which committee or group advised on the two person to a subsistence fishing boat and if there is a different protocol for private yacht fishing and if social distancing is a factor because if me and my two sons live together but can’t fish together something is wrong and on a 16 foot boat we can distance 6 ft from each other, but it shows the ad visors know nothing about seamanship or how fishing is done, and I’m sorry for the spearfishing subsistence fishermen because that requires 3 men minimum one to drive and two in the water and the cardinal rule in diving is never dive alone so two men to a boat is not helping at all unless those advising have stores that sell frozen fish and seafood so by limiting us they hope we buy their goods, so sad and I’m sure if I leave the land without the Corona virus I will not catch it fishing to bring it back to shore, but they advised only two, mudda sic we dummmmm as in d average.

I think Ministry of Health (MOH) needs to speak to the number of cases. I dont understand how we are doing better as a country when hospital beds are full and we are getting an average of 100 cases a day. MOH needs to confirm whether these cases stem from the 800 backlog or if there is a decrease in trend of new cases and the average of new cases they see.every day. I just dont think we have this under control. I hope I am wrong.