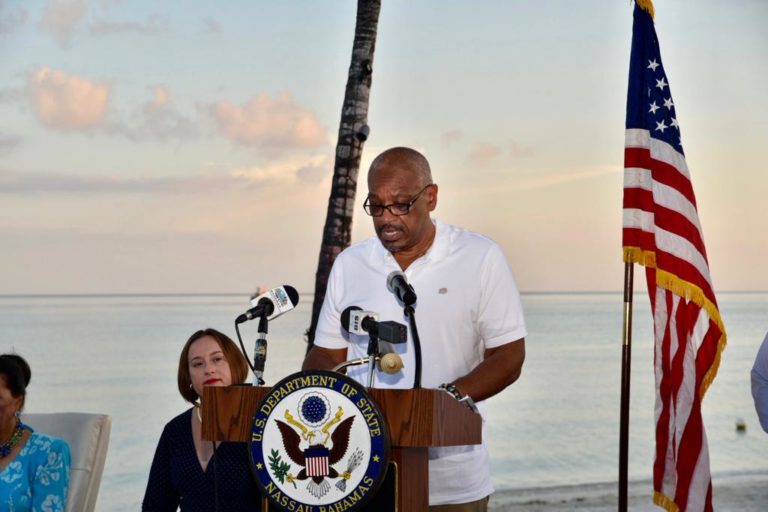 Leading the list of dignitaries at the festivities were Her Excellency the Most Hon. Dame Marguerite Pindling, and the Most Hon. Dr. Hubert Minnis, Prime Minister, who delivered remarks on the occasion.

The Prime Minister said he was happy to celebrate with the United States on behalf of the people and the Government of the Commonwealth of The Bahamas. He also extended greetings to US citizens who reside in The Bahamas or are visiting, and to the United States President and First Lady.

“Today, we once again celebrate the friendship and the enduring bond between our two sovereign independent nations,” he said. “Our nations are linked by geography and a history that predates the independence of the American colonies.”

The Prime Minister observed that, like Mexico and Canada, The Bahamas shares close geographical proximity to the US.  And that this proximity has resulted in the exchange of people, ideas and commerce over many generations and centuries.

He also noted that the majority of Bahamians trace ancestral ties to the United States of America. These include Bahamians of African descent who came from the US as the slaves of American Loyalists, who themselves populated a number of Bahama Islands.

Such descendants of the Gullah people of South Carolina settled in The Bahamas, as well as Black Seminoles from Florida settled at Red Bays on the west coast of Andros, the Prime Minister said. He also mentioned the Loyalists who populated Abaco, and the Clifton National Heritage Park, which was inhabited by Lucayans, slaves and Loyalists.

“But in addition to our physical proximity and the bonds of kinship, we share a proximity of values as democratic states. These values include an enduring commitment to self-determination and freedom, and the preservation of a treasury of democratic rights.  “These rights include: freedom of expression, freedom of association, freedom of the press, and freedom of religion, which is under threat throughout the world,” he said.

The Prime Minister said however that with as with all values, they require eternal vigilance and ongoing perfection.  These shared interests and values, he continued, resulted in the re-establishment of the Fulbright Programme for Bahamian scholars and artists.

“I am pleased with the new impetus to foster greater economic cooperation between our nations,” the Prime Minister said. “This includes the promotion of more US private and public investment in The Bahamas, including in infrastructure in our Family Islands.”

He also mentioned cooperation on security matters as both countries combat threats of human, drugs and gun trafficking.  Toward this end he again thanked the United States for the new state-of-the art coastal radar system recently installed at Great Inagua to help protect the southern border. A second radar system will be erected on New Providence, and there are plans for two more of these radar systems.

“This network of radars across our island-chain will help The Bahamas to continue to reduce crime and to better combat illegal migration, poaching and other threats to our national life and marine resources.”