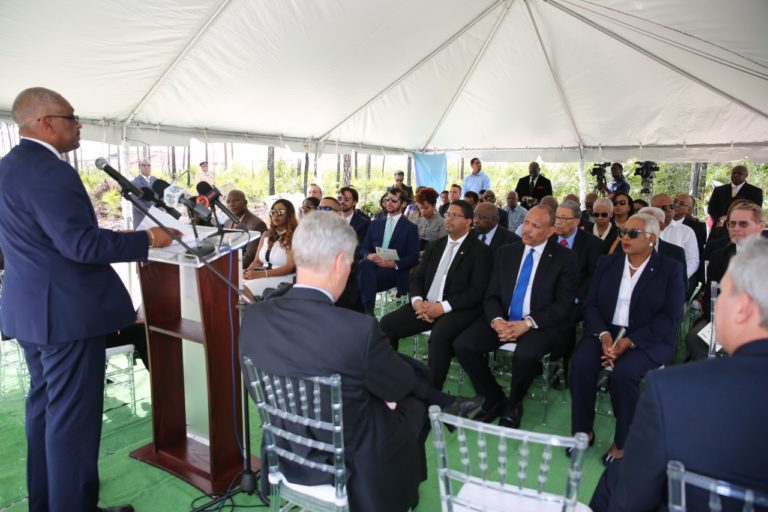 PM’S ADDRESS – Prime Minister Dr. Hubert Minnis was the keynote speaker during groundbreaking ceremonies for the proposed office complex for Colonial Group International on February 20 on the Mall Drive in Freeport, Grand Bahama. Also on hand for the ceremony were Deputy Prime Minister and Minister of Finance, Peter Turnquest and Minister of Health, Dr. Duane Sands. (BIS Photo/Lisa Davis)

FREEPORT, Grand Bahama – Prime Minister Dr. Hubert Minnis said the argument made by critics that the revival of Freeport and Grand Bahama is bad news for Nassau “makes absolutely no economic sense” and is “devoid of facts.”

There is so much room for growth in tourism in general, including cruise ship tourism, that both Freeport and Nassau will greatly benefit from new ports, said Prime Minister Minnis, who was speaking on Wednesday, February 20 at the groundbreaking of Colonial Group International’s new headquarters in Freeport.  “Both cities will also benefit from related facilities, amenities and experiences which help to boost revenue from cruise ship passengers,” he said.

“The cruise lines and international investors recognize the great potential for both New Providence and Grand Bahama, which is why companies are willing to invest in The Bahamas in tourism, technology and other sectors.”

New port facilities will mean more jobs and business opportunities for New Providence and Grand Bahama during and following the construction phase.  Plans for a new cruise port for Freeport were unveiled on February 4. The new port, operated by the Carnival Corporation, is expected to create up to 1,000 jobs and is the company’s largest cruise facility in the world. The port is expected to open in 2021.

Approval for a major port development in downtown Nassau is also in the final stages.

The new CGI headquarters is a sign of the growing confidence in the renewal of Grand Bahama, he added.

“Today’s groundbreaking is a bellwether of things to come,” said Dr. Minnis. “After so many long decades of downturn and economic stagnation, the revival of Grand Bahama has begun.”

The new headquarters will be home to the group of companies that are part of CGI, which “provides group employee benefits to more than 60,000 individuals and dependents in Bermuda and the Caribbean.”

This is the second building constructed for CGI’s businesses in The Bahamas. The other building is located in Nassau.

The new 12,000 square foot structure has a modern design and will be located on a 1.5-acre site on The Mall.

The new building will use state-of-the-art green building technology with an emphasis on energy conservation and water consumption.

The development represents a $4 million investment.

CGI’s headquarters will help enhance the city landscape of Freeport.

With the real estate and construction industries set to grow and to improve Grand Bahama, today’s groundbreaking shows a positive trend, said the Prime Minister, adding there is still a long way to go.

Prime Minister Minnis said he believes in Freeport and in Grand Bahama.

“Many people promised plenty times to do plenty things for this island,” said the Prime Minister. “It was all talk that came to nothing.”

The Prime Minister will return to Grand Bahama on Friday, February 22, for a groundbreaking ceremony for Grand Bahama Power Company’s Solar Sunrise Plant.

The plant will be the “first utility-scale solar plant” ever built in The Bahamas.