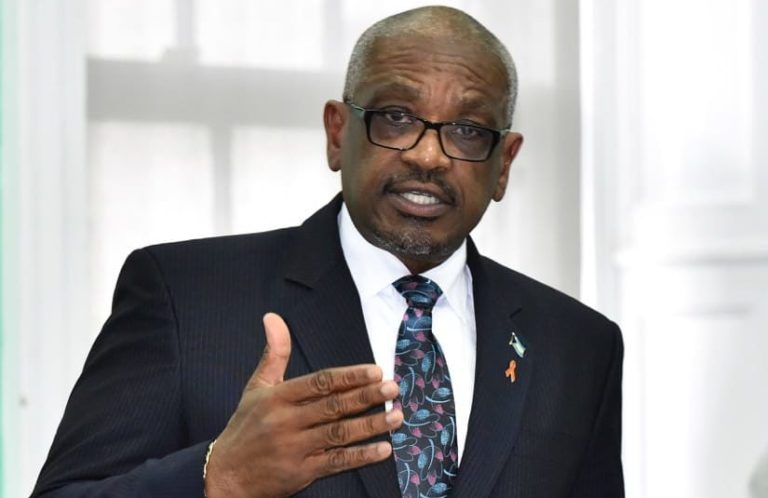 PLP commend Miller on not buckling to party pressure

“Mr. Speaker, I want Cat Island, Rum Cay and San Salvador especially to hear this because they were talking about who of our members are leaving — that is the member for Centreville and the member for Golden Isles,” Minnis said in the House of Assembly.

Miller announced his resignation in Parliament just hours before.

In October, Centreville MP Reece Chipman resigned from the FNM.

“Mr. Speaker if those two members were to get together under CPU, as a cohesive political unit, then I believe that those two members would be entitled to appoint one senator themselves,” said Minnis, to a chorus of laughter from governing members.

“If they get three more then there’d be no more PLP. They would be the official opposition. Do you want to borrow three of us?”

The prime minister erupted in laughter.

Turning to Miller, the prime minister wished him the best in the future.

“You speak from your heart and I look forward to you; if you want to cut a deal I will loan you three.”

Miller’s announcement came as he debated on an amended resolution for a vote of confidence in Prime Minister Dr. Hubert Minnis.

In a statement yesterday, PLP Chairman Fred Mitchell said the party welcomed Miller’s decision and commended him for not buckling under the pressure from the party.

“We welcome the fact that he is no longer associated with the FNM and now sits as an independent,” the PLP chairman said.

“We hope to be able to work with him as a true man of goodwill.

He said: “The street has no regard for them.

“They are like a turkey at Thanksgiving. You can stick a fork in them. They’re done.”

Miller gave a scathing review of the Minnis administration and several decisions taken this term, including the decision to lease the Town Centre Mall for the relocation of the General Post Office.

“Sinking sand is not what I stood on when I rose to oppose the government’s lease of the Town Centre Mall owned by the member for St Anne’s, then a sitting Cabinet Minister.

“I stood on principle, I stood on righteousness, which is the only solid rock. I stood opposed to the deal because it had the most offensive stench of political filth.”

The Golden Isles MP said he was ostracized and reviled by his colleagues.

He also said he was told his political career was finished and that he should not expect another nomination.

However, Miller said the FNM is losing support at an alarming rate and on its trajectory, is headed for a “crushing defeat in 2022.”

He said: “It was said that I would be destroyed by the party, but the party itself, if it continue on its present path, is on the path of self destruction.

“A political martyr is one who suffers political death for standing up for righteousness. Let me be a martyr. It is the greatest honour that could bestow upon me; and if I am to be forcibly removed from the political stage, the record shows that I took my stand, instinctively, for righteous governance.

He accused the prime minister of misleading the House on the deal, and said the lack of consequences for such a serious issues sets a bad example for the younger generation.

Miller, Chipman, Bain and Grants Town MP Travis Robinson and Pineridge MP Frederick McAlpine voted against the government’s resolution to increase value-added tax from 7.5 percent to 12 percent. As a result, they were labeled the dissident four.

The men were all stripped of their government appointments; however, Chipman had already been fired from his post as chairman of the Antiquities, Monuments and Museums Corporation earlier that year.

Yesterday, Miller said he told Minnis that it would hurt him more to vote against the government’s policy than it would hurt the prime minister to fire him because he does not believe in publicly opposing leadership.

“I did not become a part of this team to be known as a political dissident,” he said.

Last night, Minnis said the FNM will continue to do the work on behalf of the people and will remain fearless in fixing the challenges that face the electorate.

Wow ! If you don’t stand for fairness you will fall for anything WE the people are listening and watching and My Jesus is always on time.