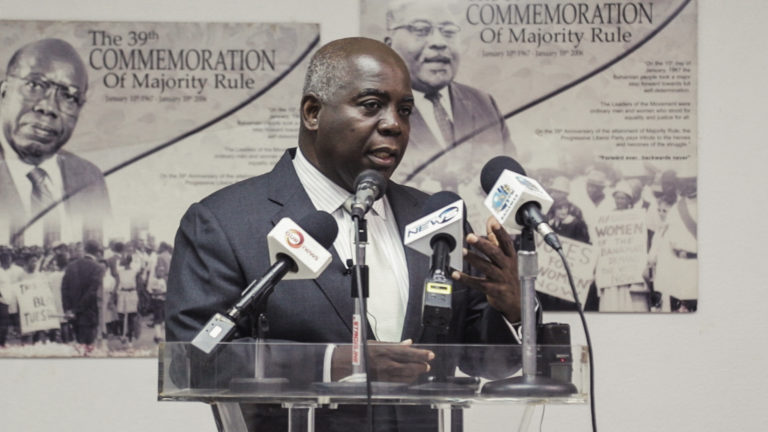 “The prime minister asserted that he made missteps,” Davis said.

“Clearly these are not missteps, not on a $5.5-billion-dollar investment and the future of Grand Bahama’s ecosystem at stake.

“These are deliberate actions to deceive the Bahamian people. His actions rank of political payback to his Free National Movement (FNM) cronies and special interest groups. We believe that the prime minister misled Parliament and the Bahamian people. We already know the FNM lied during the campaign and it seems they are lying now. We are coming clean on the details surrounding this bad deal, because one thing we know is that no lie lasts forever and the truth will eventually surface.”

In his wrap up of the mid-year budget communication in Parliament recently, Prime Minister Dr. Hubert Minnis said, while government was well intentioned to create jobs and economic growth for the nation’s struggling second city, some things happened during the processing of the Oban Energies deal that should not have taken place.

“In our haste to boost the economy of Grand Bahama, we made a number of missteps in the Oban Energies project,” Dr. Minnis said, nearly one month after the controversial “ceremonial” signing of the deal on February 19.

Peter Krieger, the non-executive chairman of Oban Energies, signed the name of the company’s president, Satpal Dhunna, instead of his own.

Dr. Minnis disclosed that not only had Krieger resigned effective March 1 but, he also admitted that government made serious errors and missteps in the $5.5 billion deal slated for East Grand Bahama.

The government endured weeks of criticism about the signing and heavy backlash from the public, including criticism from environmental groups, that outright rejected the deal.

Many opined that the project not only lacked an EIA before getting the greenlight, but also pertinent details including its proposed location.

The prime minister suggested that the project will be located opposite the Stat Oil Refinery in East Grand Bahama.

Dr. Minnis also said government should have done more comprehensive due diligence and should have engaged in wider environmental consultation.